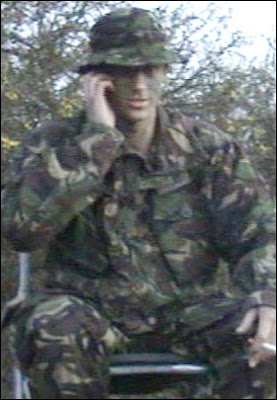 Why in hell do some people seem to be so bent out of shape over Prince Harry's normal male antics as a soldier, a prankster an engaging mate?
Turns out Harry seems to be a refreshingly ordinary 24-year-old guy.
That's something to celebrate.
So, Harry talked about a "Paki friend" and used the "F" word and said one of his mates looked like a "raghead." And Harry smokes, too. Imagine!
So what?
Harry doesn't hold public office.
He's not next in line to the throne.
And he's already known his share of adversity during his young life. I say, cut him a break.
He's trying to serve his country and be a regular guy. He wants to have friends like everyone else -- friends he can hang out with and be real with.
He jokes about the Queen and even pokes plenty of fun at himself, admitting that his hair is naturally ginger colored in places other than the top of his head.
Amidst all the studied stiffness of the royals, Harry's youthful antics and spontaneity are endearing.
Frankly, I think his mum would chuckle approvingly - her beautiful eyes alive with love for her boy. Yep, mum would be proud!
And his dad and his grandparents should feel the same way.
Be who you are Harry -- and to hell with the rest of 'em!
Posted by Dan Cirucci at 6:12 AM