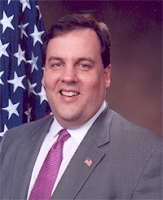 A message from Christopher J. Christie:
This morning I am filing papers to begin the process to become a candidate for the Republican nomination for Governor of New Jersey.
I did not take this step lightly. It was only after careful consideration and consultation with my family that I decided to become a candidate.
New Jersey is broken. New Jersey’s taxes have become so unaffordable that more families are leaving our state than moving here. Our state's business tax climate is ranked 50th in the nation and has become so unattractive to employers that only government jobs are growing in New Jersey. Yet nothing in Trenton gets done to fix these problems.
We can change this. We can solve these problems if we're willing to make the tough decisions.
In my seven years as your United States Attorney, I didn't shy away from any of the tough decisions. I took on corporate greed, political corruption, terrorism and environmental polluters. Public officials from both parties were prosecuted for corruption – more than 130 were convicted, and not one was acquitted. Corporate executives who cheated their companies and hurt their workers were successfully prosecuted. Terrorist plots were disrupted; polluters punished.
Many didn’t believe we could win these battles. We did, and with strong leadership we will win the fight for Governor and change this state for the better.
My formal announcement for Governor will come in the first week in February . . . With strong leadership now, we can fix our broken state and make it more affordable for all New Jersey families. . . .
Our website is still in formation, but please visit, www.christiefornj.com, to sign up for email updates and details about our announcement.
We applaud Chris Christie for taking this step.
And we're happy that he did not wait - that he is already engaged; that he's out front with his message and that he's ready to go.
This move by a courageous public servant gives New Jersey its first glimmer of hope in many years.
Gear up, New Jersey: A bright new dawn awaits if we can match Chris' courage with our own resolve to make it happen!
Posted by Dan Cirucci at 12:24 PM

I like him for his anti-corruption work. NJ needs that more than anything. But I have a question, regarding this message. What terrorist plots is he talking about?

I always thought Brett Schundler would rise to the top in NJ. What happened?