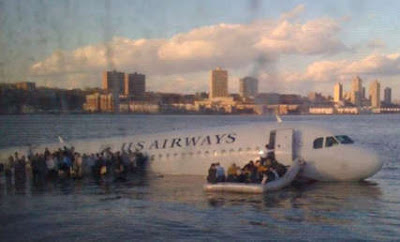 It's being reported that Canada geese were probably the culprits in today's Manhattan US Airways plane crash that nearly cost more than 100 people their lives.
The birds apparently flew into the plane's jet blades less than a minute after takeoff.
Thank goodness a very experienced US Airways pilot and crew acted quickly and expertly to land the plane on the Hudson River and save lives.
Birds reportedly have been a threat to air flight since the time of the Wright brothers.
But the situation has worsened in recent years.
Who among us has not been plagued by these dirty, disgusting, rapidly-multiplying Canada geese? Their numbers grow at an alarming rate and their sheer brazenness is alarming. They take over more and more acreage including public parks they leave their waste everywhere, creating health risks.
Now, these filthy, emboldened birds are threatening flight safety.
There is a solution to the growing problem of Canada geese: Kill them!
But you know that the animal rights people and environmental wackos don't want us to do this. They think they know better.
Maybe these zealots would prefer that a few more planes go down or that more land, parks and open space be taken over by these loud, dirty, disgusting creatures. Maybe they don't really care if people are killed by the birds flying into planes.
Now, it's come to this: Which will it be -- us or the birds?
Posted by Dan Cirucci at 7:00 PM

That said, I still have you on my feed reader. Keep up the work.

I promise, I wrote my post before looking at yours. Great minds, I hope.
MJHawkeye

Thanks, MJ!
And Dave - I'm glad you're still following the blog. I appreciate the fact that you're still reading and you still find it entertaining.
Yes, I originally identified them as Canadian because that's what a lot of people call these geese here in Joisey where we may not always be STRICTLY correct but we know what the hell we're talking about.
Wikipedia says that these geese DO breed in Canada and they are often called "Canadian." But this name is not in accord with the American Ornithologist's Union. Well, exCUSE me!
Anyway, thanks to all!

How dare you take the side of the airlines... they killed harmless geese who were flying in their pristine natural habitat. Shame on you. hahaha

stupid birds need done away with