Wyeth: One Of The Greats 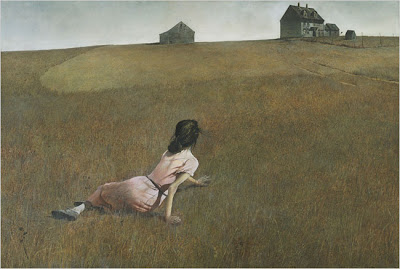 Andrew Wyeth, one of America's great artists died quietly Friday at his home in beautiful Chadds Ford, Pennsylvania. He was 91 and he died in his sleep.
Wyeth lived a long, vastly accomplished life. He was a man of great insight, extraordinary creativity and gentle humor. By all accounts, he was a fine man processed of an incredible work ethic, a love of family and a deep commitment to his craft.
Above all, he was an American artist and his art reflected an American view of the world -- a view anchored in the vastness of the land, the realities of rural life and the simple values of humility, hard work and perseverance.
As the New York Times has reported: "In later years, [Wyeth]became a familiar sight around Chadds Ford, driving his beat-up GMC Suburban through the fields and riverbeds with a sketch pad on the seat. Menus at the inn in Chadds Ford, where he had his regular seat at a corner table, were decorated with his sketches of Washington and Lafayette.
He lost a lung, survived a near-fatal illness, and had a hip operation, but kept working, energized partly by disdain for his detractors. “I’m not going to let them disrupt my old age,” he said.
Like many great artists Wyeth didn't obsess on the reception that his work received. But he recognized that in the modern art world, promotion was necessary. After all, he was a realist.
Again, from the Times: “I am an example of publicity — a great deal of it,” he also said. “I’m grateful because it gives me the freedom to go and try to do better. But I never had any great idea that these people are understanding what I’m doing. And they don’t.”
Wyeth added: “Let’s be sensible about this. I put a lot of things into my work which are very personal to me. So how can the public feel these things? I think most people get to my work through the back door. They’re attracted by the realism and they sense the emotion and the abstraction — and eventually, I hope, they get their own powerful emotion.”
Wyeth was inspired by his artist father, N. C. Wyeth and Wyeth in turn inspired his son, artist Jamie Wyeth. Wyeth was also inspired by one of my favorite artists, Winslow Homer. Indeed, the Wyeths are a family of artists.
In 2007 President Bush presented Andrew Wyeth with the National Medal of the Arts. Wyeth had already received the Presidential Medal of Freedom several decades ago. In 1977, he became the first American artist since John Singer Sargent elected to the Académie des Beaux-Arts. In 1980, Wyeth became the first living American artist to be elected to Britain's Royal Academy. On November 9, 1988, Wyeth received the Congressional Gold Medal, the highest civilian honor bestowed by the United States legislature.
Andrew Wyeth was an American treasure and one of this nation's astonishing gifts to the world.
See many of Andrew Wyeth's works as well as other works by members of the Wyeth family at the beautiful Brandywine River Musem in Chadds Ford.
Visit the Andrew Wyeth Memorial Donations Page.
Add your comments to the Andrew Wyeth blog.
Museum of Modern Art “Christina’s World,” 1948, by Andrew Wyeth
Posted by Dan Cirucci at 10:24 AM