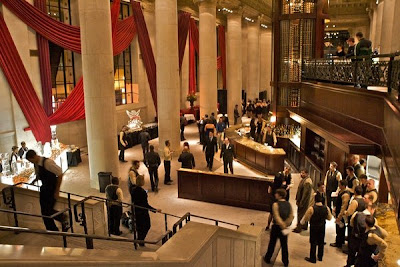 It was f-f-f-frrrigid again last night but we nonetheless decided to keep our reservations at the new Del Frisco's Double Eagle Steak House in Philadelphia.
Del Frisco's is located in the old First Pennsylvania Bank space at 15th and Chestnut Sts. in what used to be called the Packard Building but is now The Grande condominiums.
The first thing you notice about Del Frsico's is the grandeur. The place is huge with towering columns, an ornate ceiling, grand staircases, rococo railings and banisters and lots of vivid red velvet.
And the prices match the grandeur. Expect to pay more than $40 for a steak. That's just for the meat. The vegetables, etc. are extra. In fact, everything is pretty much al-a-carte.
Which is why we chose to check out Del Frisco's during restaurant week when a pre-fixe three course menu was offered. The place was jammed: crowded, noisy, hectic. But our reservation was honored promptly and we were given a nice seat directly in front of Del Frisco's enormous bar which runs the length of this long, rectangular space.
Del Frisco's pushes "steak, wine and romance" but the bar scene is a huge attraction.
Since the bar jettisons out into the dining area there is ample spillage of the bar crowd into the dining space. If you're a bar person, you'll probably like that. If you're not, you won't.
The signature "VIP martini" is vodka infused with pineapple and its tasty enough but it lacks kick. It is not as good as the Stoli Doli which is served up at The Capital Grille.
The soups and salads were excellent. And the bread pudding dessert (even though I'm not a fan of bread pudding) was wonderful.
But be forewarned: meats and vegetables are heavily seasoned. We received filets that seemed to be infused with peppercorn. Ditto the chateau potatoes (whipped). Unless your palate is accustomed to highly seasoned food, you will need to drink plenty of water as your tongue will burn.
The coffee was only lukewarm and the service was disjointed. Then, we had to wait quite awhile to get our coats.
OK, so it was a very busy night. And we were taking advantage of a "special."
And right now Del Frisco's is the hot new place in town. Maybe things will settle down. But this is still Big Deal dining and drinking for expense accounts and (maybe) special occasions.
Posted by Dan Cirucci at 9:58 AM

What are Wagyu steaks?

Obama held a rather special dinner at the hite House two nights ago. His very favorite meal, wagyu steaks run at anywhere from $60-$89 per lb.and he served these to his guests.It's one level down from Kobe steak. It's out of my price range.

I see. AND he has brought his own chef in from Chicago!
Who knew he and Michelle had their own chef?
We were led to believe they cooked their own meals -- that they were two young, modern working parents just like everybody else who fixed breakfast for their kids, etc.
Now that they've won the big prize it cam be revealed: They have had their own chef all along and he's now been imported to the White House.

Well, when one's salary is increased from $115K to $320 in the course of one year, ala, Michelle, then chefs and food perks can happen.