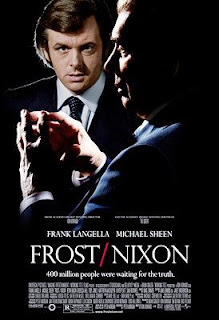 Let me put my cards on the table so you'll understand where I'm coming from: I never voted for Richard Nixon.
I never liked him.
I never supported him. Never.
In fact, I actively opposed him. As a young citizen, I opposed him in 1960 during his first run for the White House.
I oppose him when he ran for Governor of California in 1962. Even though I lived 3,000 away from California I still perceived him to be such a threat that I wore "Pat Brown for Governor" button.
I opposed Nixon again in 1968 and was heartbroken when he won even though I wasn't exactly the most ardent Hubert Humphrey fan. And, I opposed Nixon again in 1972 even though I knew that McGovern was not the best candidate the Democrats could field.
So, I never liked Nixon and I celebrated when he was forced to resign from office.
Now that all this is our of the way I can tell you that I found the movie Frost/Nixon spellbinding. Absolutely spellbinding.
Yes, I remember the David Frost interviews. But I really wasn't aware of the complete story of the interviews until I went to see this remarkable film. The performances by Frank Langella (Nixon) and Michael Sheen (Frost) as well as Kevin Bacon, Toby Jones and Oliver Platt are all first rate. The direction by Ron Howard is tight, intense, disciplined, gripping.
If you lived through all of this, you will be awakened to the man and the times and the crisis all over again.
If you haven't, you will learn a great deal about politics, democracy, the media and our Constitution.
There is no doubt that Nixon will be studied forever.
And this film begins to put things into perspective
Nixon was a complex man -- an enigmatic, detached, difficult personality who stirred strong emotions, pro and con. And, he certainly had his grievances.
There are no heroes or villains in this film.
Instead, we see Nixon as the complicated personality that he was. And we see Frost for what he was and is. Interestingly enough, the two shared a bond that might not ordinarily be evident on first examination.
We are reminded that things are not what they might first appear to be.
This is a fascinating film -- intelligent, mature, significant.
And it deserves all the attention and all the award nominations that it is receiving.
I urge you to see Frost/Nixon!
Posted by Dan Cirucci at 6:52 PM

I heard and interview with Jack Brennan(Kevin Bacon0 on the Michael Medved radio show. Brennan stated that the portrayal of Nixon in this film was 90% wrong.
Who to believe; Ron Howard who is turning into an Oliver Stone or a trusted aide of Nixon.

"Nixon's meteoric rise from the unemployment line to the vice presidency in six quick years would never have happened if TV had come along 10 years earlier. He got away with his sleazy "my dog Checkers" speech in 1952 because most voters heard it on the radio..."

I believe his ascent might have had more to do with Wittaker Chambers than the Checkers speech although it certainly added to the soap opera. I remember that speech well. Could you turn down your daughters after seeing that loveable little pooch?
Didn't think so.

The Checkers speech is considered a classic and is included in many collections of "great speeches."
With "Checkers" many believe that Nixon made extraordinary use of the still young medium of TV and appealed directly to his audience in a way that tapped into middle class sensibilities and resentments.
His approach was audacious. He gamnbled and won. Ike was forced to keep him on the ticket.
Now, back to the film: Yes, Ron Howard and his cohorts seem to be ardent liberals and they have gone so far as to equate Nixon/Watergate with Bush/Iraq. BUT, as I understand it, the large sections of the film that depict the Frost/Nixon interviews are taken directly from the actual interview transcripts. It's hard to argue with that.
AND the film depicts Nixon as an often conflicted three-dimensional figure who stuggles with his own problems rather than as some stereotypical villain.
I stand by my recommendation of the film.
Go see it and make up your own mind!