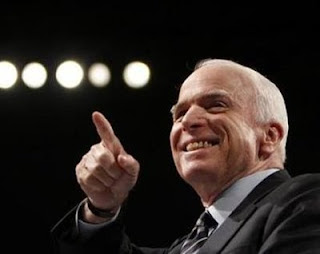 John McCain will call today for the lifting of a ban on oil and natural gas explora
tion to help address the nation's "dangerous" dependence on foreign oil.
McCain says the United States has 21 billion barrels of proven oil reserves which are not being tapped because of a federal moratorium on exploration and production.
"I believe it is time for the federal government to lift these restrictions and to put our own reserves to use," he will say. "We can do this in ways that are consistent with sensible standards of environmental protection."
McCain is making energy independence and fighting climate change key components of his bid for the White House.
"Various oil ministers and investment firms have confidently informed us that soon we can expect to pay $200 for every barrel, and as much as $7 for every gallon of gas," he will say.
Cutting back on energy usage -- a key strategy of Europe's efforts to fight global warming -- was critical in the United States, McCain will say.
McCain describes U.S. energy security as a "dangerous situation" in his speech and calls for a reform of laws and regulations that govern the oil futures markets to make the rules more effective.
Posted by Dan Cirucci at 8:47 AM