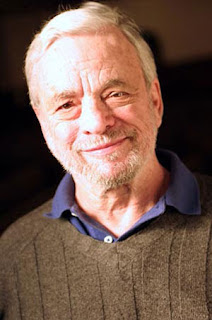 Thanks goodness Stephen Sondheim (pictured) was given a special Tony Award the other night recognizing his lifetime of achievement in the theatre. And thank goodness he's still here with us to enjoy it. He is, quite simply, The Master!
Beyond that, for the first time in many years I can honestly say I don't know which Broadway "musical" won the Tony this year - and I really don't care.
I know it was either Passing Strange or In The Heights.
But I'm not the least bit interested in either of them.
Why? Because they simply aren't Broadway musicals. They don't fit the definition of a Broadway musical anymore than Rent did when it won the Tony.
And, it's worth noting that Spring Awakening, last year's Tony winner, is not really a Broadway musical either. None of these shows are traditional Broadway musicals.
The only musicals of note this year were revivals: Gypsy and South Pacific. Both of these shows received their share of honors with South Pacific snagging best musical revival and Patti LuPone winning for the Mama Rose role in Gypsy.
Many people say Young Frankenstein is a lot of fun but I'm simply not a big Mel Brooks fan.
Broadway is drifting right now. It's in one of those funny, kooky periods when youth cult fads and aberrations suddenly come center stage and everyone tries to show how "hip" and "with it" they are.
I'm not buyin it.
BTW: I know that technically the title of the new production of South Pacific is Rogers and Hammerstein's South Pacific but I'm not buyin that either. The name of the show is South Pacific.
Posted by Dan Cirucci at 7:43 PM