One Night In June 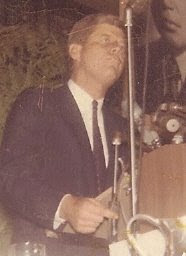 Here's another photo from that June evening in Camden 48 years ago when John F. Kennedy came to town to speak at a Democrat Party fund-raising dinner.
Like the others, this is a photo that I've never shown publically before.
Things were different in 1960. Kennedy did not have the nomination "wrapped up" by any means, even in June.
Only certain states had presidential primaries. Other states delegates and presidential preferences were determined largely by party bosses. In nearby Pennsylvania, power brokers such as Governor David Lawrence and Philly Democrat boss Bill Green pretty much controlled the delegation. Green leaned toward Kennedy but Lawrence still had to be convinced. So, nothing was certain. In Joisey things were as dumb as ever. Democrat Governor Robert B. Meyner was Joisey's choice as a "favorite son" and he held the delegation together so that it wouldn't be committed to any of the Democrat presidential candidates. In the end, Meyner waiting too long and the Kennedy bandwagon left Joisey in its wake. Once again, Joisey was forgotten and so too was Meyner.
There were plenty of Democrat presidential aspirants in 1960: Kennedy, Johnson, Humphrey, Symington and (though not undeclared and not "officially" campaigining) Stevenson.
In the end Johnson emerged as Kennedy's nearest challenger and Stevenson (with the help of the party's left wing) actually came closer to being nominated a third time than most people expected. But Kennedy prevailed and, you know the rest of the story.
Posted by Dan Cirucci at 9:41 PM