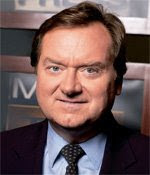 Statement of President Bush on the death of Tim Russert:
Laura and I are deeply saddened by the sudden passing of Tim Russert. Those of us who knew and worked with Tim, his many friends, and the millions of Americans who loyally followed his career on the air will all miss him.
As the longest-serving host of the longest-running program in the history of television, he was an institution in both news and politics for more than two decades. Tim was a tough and hardworking newsman. He was always well-informed and thorough in his interviews. And he was as gregarious off the set as he was prepared on it.
Most important, Tim was a proud son and father, and Laura and I offer our deepest sympathies to his wife Maureen, his son Luke, and the entire Russert family. We will keep them in our prayers.
Posted by Dan Cirucci at 5:48 AM