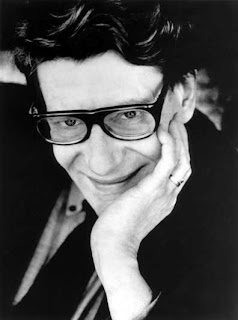 He lived in the world of haute couture.
But his real significance came in the way he influenced everyday dress: the clothes we wear, the colors we choose, the patterns we find acceptable, the styles we come to accept.
According to the New York Times: "he was largely responsible for changing the way modern women dress, putting them into pants both day and night, into peacoats and safari jackets, into 'le smoking' (as the French call a man’s tuxedo jacket), and into leopard prints, trench coats and, for a time in the 1970’s, peasant-inspired clothing in rich fabrics."
Through his laser-like focus on fashion he helped to created a new definition and he changed the way we look at the world.
Again, according to the Times, he "often sought inspiration on the streets, bringing the Parisian beatnik style to couture runways and adapting the sailors’ peacoats he found in Army-Navy stores in New York into jackets that found their way into fashionable women’s wardrobes around the world. His glamorous evening clothes were often adorned with appliqués and beadwork inspired by artists like Picasso, Miró and Matisse. .
Among the women of style who wore his clothes were Catherine Deneuve, Paloma Picasso, Nan Kempner, Lauren Bacall, Marella Agnelli and Marie-Hélène de Rothschild. "
Of course, he also lent his name to menswear and to fragrances, linens and home goods. But it was women's clothing that remained the essence of his work and the definition of his art.
He was Yves Saint Laurent and his name was synonymous with a time when fashion actually meant something - when it was more than a fleeting fantasy.
His death yesterday at the age of 71 is a mere footnote to his enduing legacy: his enormous body of work and his boundless influence. He was one of those people who fused life and work in such a way that the words Bigger Than Life immediately came to mind when you thought of him.
And so he remains: Bigger Than Life!
Posted by Dan Cirucci at 6:00 AM