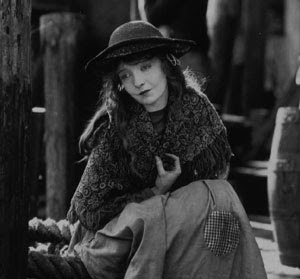 Has there been any star before or since who has matched Lillian Gish?
I doubt it.
In D. W. Griffith's 1919 film Broken Blossoms Lillian Gish plays an abused daughter who lives in the slums of London with her father who's a renegade and a thug. To get away from her father, she (quite accidentally) takes up with a young Chinese merchant who teaches her the true meaning of love and tenderness.
Lillian Gish was 23 years old when she made this movie and she continued to work in motion pictures for another 68 years!
I watched this film last night as Turner Classic Movies featured an evening of Asian images in film. Several of the films (including this one) were from the silent era.
You cannot understand the movies until and unless you study the silents. This is where the language of film was written This is where techniques were developed. This is where and how actors learned to act for the camera. This is where the closeup was born.
All of the elements of film storytelling that we now take for granted were invented and developed during the silent era.
And, working with Griffith, Lillian Gish helped to write the language, develop the techniques and refine the movements, the gestures and, above all the look that would define what it means to be a movie star.
It was hard work - gruelling work that left little room for the sort of egos that get in the way of things nowadays..
Griffith and Gish understood the hard work of their infant business even if they didn't know that they were giving us a new art form.
Where would we be today without them?
Posted by Dan Cirucci at 6:02 AM