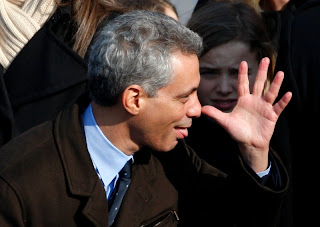 With the new year upon us, here are 10 people to keep an eye on as we move through 2010.
The fate of these 10, and others, may determine what lies ahead. I list them below in no particular order:
1. Harry Reid - With Reid and other weary old Congressional Democrats, we may be watching the final sequel to Grumpy Old Men. Harry has already faltered, but if he falls they will topple like a row of dominoes.
2. Mitt Romney - He'll have to start speaking up and making his moves soon if he hopes to make another run at the presidency. This will also be his year to back key GOP aspirants and build up more IOUs.
3. Chris Christie - The new Governor of New Jersey faces huge hurdles but if he succeeds in getting the Garden State to turn the corner and move away from tax 'n spend recklessness, he will chart a new path for the GOP.
4. Arlen Specter - Snarlin Arlen played a wildly risky game in '09. But in the real world, it's not so easy to have nine lives. And right now, the calendar says 10. Times up, Arlen.
5. Janet Napolitano - She made it into 2010 but just barely. She may very well be the first Obama cabinet member to go Kabooom!
6. Eric Cantor - This bright shining start of the GOP faces a Huge Year. If everything falls into to place he could be one of the most formidable members of Congress in the new decade.
7. Blanche Lincoln - This Arkansas Senator who voted for the Obamacare swindle is high on the Republican target list. Things don't look good.
8. John Runyan - If Big John really does run for Congress in Jersey's third congressional district, he just may make freshman Congressman John Adler's $2 million dollar war chest look real small, real fast. It could get dicey.
9. Rahm Emanuel (pictured) - If the Obama slide continues, more and more attention will be focused on this guy. Hey, somebody's gonna have to take the blame and it won't be Mr. Cool, that's for sure.
10. Sarah Palin - We know she likes to surprise us and you gotta admit, she's fun to watch most any year. In any event, she ain't goin away.
Yes, 2010's destined to be a fun year.
Don't you just love it when things heat up?
Posted by Dan Cirucci at 3:28 PM

Sarah is definetly interesting.
She's so much like Dick Cheney in that like he, she speaks her mind and drives the far left crazy.
The left won't be able savage her like they did last time.
Her supporters aren't going to stand for it again.
This one isn't.