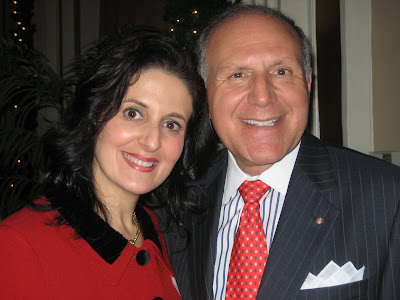 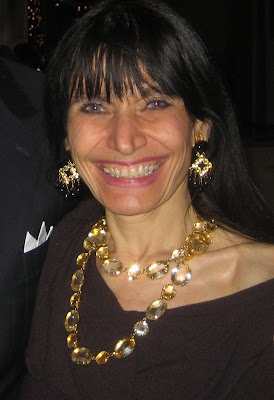 On Wednesday evening we were back in Philadelphia at the spectacular Ballroom At The Ben for the big, gala Justinian's Christmas Party sponsored by the Justinian Society of Italian American lawyers.
For the Philadelphia legal community, it simply isn't Christmas without the Justinian's Christmas party and this year was no exception. More than 300 people attended the event and were treated to a two-hour, fully stocked open bar as well as colossal shrimp, crab claws, salad, pasta, turkey with all the trimmings and succulent roast beef followed by coffee and an array of wonderful desserts.
We saw so many of our favorite people at the event including Justinian Society Chancellor Gina Furia Rubel (shown above with National Italian American Foundation President Joe Del Raso). And of course we saw Rochelle Fedullo (shown above) who is the glamorous half of the talented lawyer team of Bill and Shelly Fedullo.
We also chatted with Matt DiDomenico, Judge Denis Cohen, former Philadelphia Bar Association Chancellor Gabe Bevilacqua, Hank Lunardi, John Padova, Philadelphia Bar Association Vice Chancellor Rudy Garcia, Alex Giacobetti, Terri Italiano, Judge Anne Lazarus, former Philadelphia Bar Association Chancellor Jane Dalton, Vito Canuso, Carmen Nasuti, the legendary A. Charles Peruto, Chuck Peruto and many others.
It was great to see so many familiar faces and share the sentiments of the season.
We particularly enjoyed sharing ideas with Joe DelRasso about how to combat stereotyping, on shows such as the disgustingly insensitive Jersey Shore. NIAF, UNICO and OSIA are all united in opposition to this piece of trash disguised as entertainment.
BTW: We hear that several Justinians are in line to become Chancellor of the Bar Association, including our dear friends Bill Fedullo and Gaetan Alfano. To that we say: "The more the merrier. Let Justinians reign supreme!"
Posted by Dan Cirucci at 7:39 PM