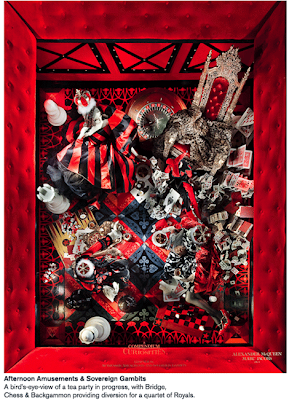 Christmas would not be Christmas without the Christmas windows at Manhattan's speciality and department stores from Macy's on Broadway all the way up to Bergdorf's on Fifth Avenue and Barney's on Madison Avenues.
We enjoyed all the windows this year but none more than Bergdorf's which focus on Alice in Wonderland (above). The Bergdorf tableauxs from the story of Alice rekindle your imagination and excite the senses. They are absolutely lush -- rich in texture, color and design.
Bravo to Bergdorf's for pulling out all the stops this year.
Here's a roundup of the others:
Macy's - A delightful animated story for children that follows the journey of an old-fashioned snail mail letter to Santa. This nostalgic subject is updated with hi-tech features.
Lord & Taylor - Once again, a traditional Christmas story that features Lord & Taylor turn-of-the-century and Victorian favorites. Many classic elements stressing the comfort and security of home and family. As always, the most Christmas of Christmas windows.
Saks - The tale of a snowflake and its journey from the heavens to New York City teases us with a touch of political correctness as it stresses the joys of diversity amidst the vast community of snowflakes. And just to make sure the lesson is now lost on the little ones, a children's book is available for purchase as well.
Henri Bendel - No decorated windows but the entranceway is a sight to behold -- all sparkle and aglow with flash and glitter. Sure to pull you in.
As always, the Rockefeller Center tree dazzles but we were somewhat put off by all the corporate sponsorship and shameless promotion of Swarovski. Well, somebody's got to pay the bills.
We also visited the beautiful nature-inspired tree at Astor Court in the New York Public Library -- always a favorite.
And, we dropped by the new shops at The Plaza. We weren't bowled over but we did enjoy the new Eloise store featuring paraphernalia celebrating the famous little girl who lives at The Plaza.
We mourn the loss of the Palm Court at The Plaza just as we mourn the loss of the wreaths that adorned the lions in front of The Library. The Palm Court gave way to the Plaza rehab and the wreaths were dumped because apparently some enviro-nut decided that they were harmful to the stone lions.
We lunched at Redeye Grill, one of our new favorites. If you haven't been there, check it out. You won't be disappointed.
Posted by Dan Cirucci at 12:26 PM

Dan, thanks for the Christmas trip up 5th Avenue. I did not get up to NYC this year so this blog was special for me. Josephine

Josephine:
\I'm so glad we were able to share this with you. Merry Christmas!