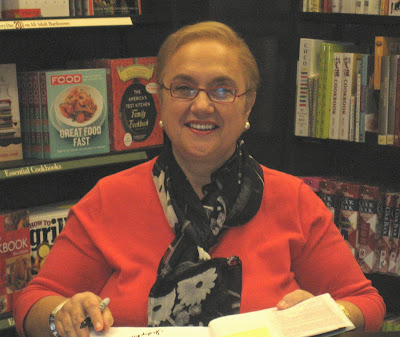 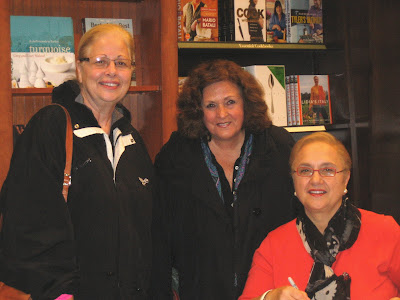 Lidia Matticchio Bastianich came to Cherry Hill last night and was welcomes by a huge crowd at Barnes and Noble at Garden State Park.
Among her fans were Maryann DelRossi and Lenora Annibale (shown above).
The name "Lidia" is synonymous with cooking from the heart of Italy. And that's just another way of saying tutti a tavola a mangiare (everyone to the table to eat!).
Lidia was in town for the launch of her new book, Lidia's Italy which contains 175 regional recipes. And no one knows regional Italian cooking better than Lidia.
In fact, she has single-handily introduced Americans to a deeper, broader, more authentic and more varied menu of Italian dishes.
And this new book goes along with Lidia's new 26-part public television series.
What is the secret of Lidia's appeal?
It's simple; she's genuine.
Lidia was exactly as we expected her to be: friendly, smiling, personable and exuding the disposition of sunny Italy.
Though Lidia was born in Croatia, lived in Italy and eventually settled in New York, she and her family did reside in New Jersey for awhile. The family made its mark first with restaurants in Queens and then in Manhattan.
It was Julia Child who introduced Lidia to television when she invited her to guest on her series Julia Child, Cooking With Master Chefs.
In 1998, PBS offered Lidia her own show, Lidia's Italian-American Kitchen, which established her as a fixture in the network's cooking show lineups.
Lidia now has her own television production company: Tavola (Italian for "table") Productions. The family's business empire includes vineyards in Italy, olive groves in Istria, and a host of commercial food products and new business ventures revolving around the culinary arts.
In an interview with American Public Television, Lidia shared her opinion on how important passing along family traditions is to her and to her family: "...food for me was a connecting link to my grandmother, to my childhood, to my past. And what I found out is that for everybody, food is a connector to their roots, to their past in different ways. It gives you security; it gives you a profile of who you are, where you come from."
BTW: Look for the next 26 episodes of Lidia's Italy in September, 2010!
Posted by Dan Cirucci at 6:29 AM