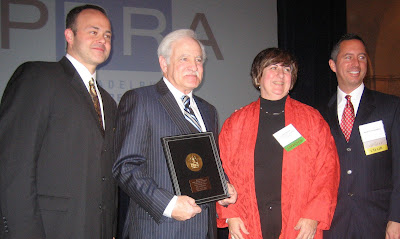 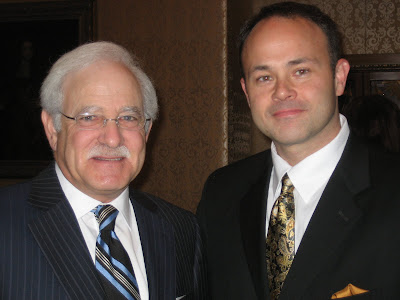 We've had an incredibly busy week full of so many special events that it's difficult to chronicle everything we've done and everywhere we've been.
But we'll try our best and begin with the region's most illustrious media personality, Jim Gardner.
On Monday, the Philadelphia Public Relations Association (PPRA) presented 6 ABC TV's Action News anchorman with its prestigious Gold Medal recognizing the distinction and acclaim that he has brought to Philadelphia and the entire region. The luncheon event was held at Philadelphia's Ritz Carlton Hotel on the Avenue of the Arts.
To call Jim Gardner an anchorman only begins to scratch the surface. Quite simply, Jim Gardner is to Philadelphia what Walter Cronkite was to the nation. He is the most trusted person in the Delaware Valley.
Shown above (in top photo) are PPRA President Bill Cowen, Gardner and Gold Medal Committee co-chairs Lisette Bralow and Mark Tarasiewicz.
Jim Gardner's career is a testament to his professionalism and his enduring appeal.
On June 1, 1976 Gardner became a reporter and noon anchor of WPVI-TV in Philadelphia.
In November 1976 he became the anchor of the 5:30 p.m. broadcast. In 1977 he became the anchor of the coveted 6 p.m. and 11 p.m. time slots, a position he has held ever since. In the May 2009 sweeps, Action News was rated # 1 in all news broadcasts beating out rivals KYW-TV and WCAU-TV in all time slots.
Important events that Gardner covered include: As main anchor, Gardner has also helped Philadelphians through the deaths of two popular Action News personalities: Jim O'Brien in 1983 and Gary Papa in 2009.
Gardner is active in the Philadelphia metropolitan area and supports several charities. He has sponsored the Jim Gardner Scholarship for journalism and broadcasting students at Temple University (since 1987), as well as awarding the Jim Gardner Scholarship at Columbia. With the exception of 2005, he has read the Declaration of Independence aloud at Philadelphia's Independence Hall every Fourth of July.
Gardner's remarks upon receiving the award were compelling and inspiring.
I cannot tell you how proud I was to serve on the Committee that planned this memorable event.
Bravo, Jim Gardner!
Posted by Dan Cirucci at 6:42 AM