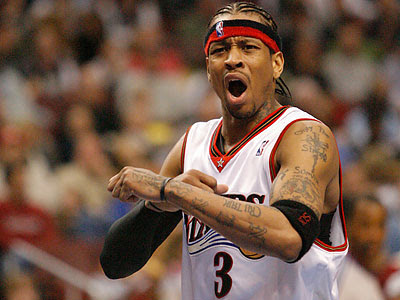 Saying in effect that Philadelphia is where he wants to bring his career to a proud close, Alan Iverson rejoined the Philadelphia 76ers today at an emotional news conference where he openly wept and expressed his love for the city and its fans.
Iverson said his wife and kids were totally on board with his decision to come back to Philadelphia. "I love Philadelphia. I love these fans and they love me," Iverson said.
When asked about his previous problems in the city, Iverson said "that was three years ago."
"I was young. I did some things I shouldn't have done," Iverson added.
"I know I was born to play basketball. I know I can play. I know this is what I want to do," he explained.
"I really think it's a blessing that I'm back. I think it's only right."
Posted by Dan Cirucci at 5:27 PM