The Man And The Moment 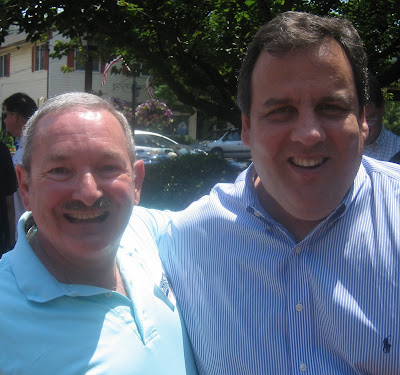 I'm instinctive.
So I make up my mind about people fairly quickly. And my first impression counts for a lot.
I first met Chris Christie back in May at a rather quiet campaign stop in the picture-perfect town square in Medford, just on the cusp of the Jersey pines. The day was exceptionally warm. The sun was bright.
And the crowd of no more than 30 or 40 people was mostly composed of party loyalists.
I didn't really know anybody there at Medford that sunny afternoon. They were all pretty much strangers to me.
And then Chris Christie arrived.
And he came right up to me, shook my hand and before I knew it we were chatting.
I liked him instantly.
Sure, I knew about Chris Christie. I knew he was a tough prosecutor who put a lot of corrupt politicians in jail. I knew he was a crime-fighter and probably a damned good lawyer. But I didn't know a heck of a lot more than that.
And maybe that led me to expect someone who would be more formal, less engaging, more intimidating.
That's not what I found at all.
Instead, I encountered this big, gregarious, affable guy who joked quickly, laughed easily and seemed to be totally at ease with himself -- the type of guy you want to have on your side. He exuded an open, friendly confidence.
I watched him as he interacted with others. He took time with each person and no topic or person was too small or insignificant not to warrant his attention.
And then he spoke to the small crowd and he was every bit as confident and at ease with the state budget and school taxes as he was with yesterdays baseball boxscores or last weeekend's trip to the shore. From one-on-one to small group, he was seamless. The guy knew his stuff. And he knew how to connect the dots: he knew that everything really is related to everything else.
It was clear to me that he understood that politics is about people and that your message, your goals and your vision have to relate to real people and connect with who they are and how they live.
So, my mind was made up.
And right then and there I became a Chris Christie fan.
Many things will now be written about Chris. But here's what most of the media have consistently missed and here's what you must remember above all: Chris Christie understands you, New Jersey. He knows what makes you tick. He understands it all, not because somebody has shown him poll results or focus group findings but because he lives it.
Jersey's pulse is his pulse. Jersey's (sometimes wounded) pride is his pride. Jersey's dream is his dream.
So now the man and the moment and the masses have met.
And I like to think that it all happened because somewhere along the way a lot of New Jerseyans came to know Chris Christie at one level or another in the same way that I did. And they simply decided: This is my guy. This is the man for New Jersey.
I've got to believe that this is the greatest accolade Chris Christie can imagine -- that you've placed your trust and confidence in him.
And I've also got to believe that he'll do us proud.
Posted by Dan Cirucci at 7:10 AM