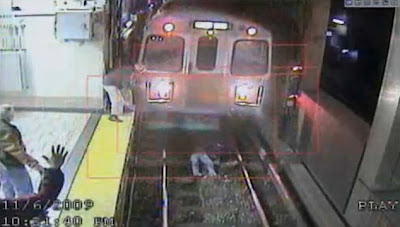 This is a photo from the chilling video that captures a drunk woman's brush with death after she fell on to the tracks of an underground station into the path of an oncoming train.
CCTV images captured the woman falling off the platform onto the tracks before horrified bystanders at Boston's North Station shortly before 11pm on Friday night.
As the lights of a train can be seen approaching, the bystanders frantically waved to the driver in a desperate attempt to get her to stop.
The woman lies motionless on the tracks, apparently having temporarily passed out.
But the female driver of the train reacts instinctively, wrenching her emergency hand brake.
The train comes to a sickening halt - partly over the motionless body of the drunk woman.
Half a second later she leaps out from underneath the train and clambers up the side of the platform.
Photo and details from Britain's Daily Mail.
Posted by Dan Cirucci at 4:33 PM