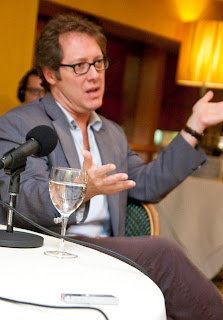 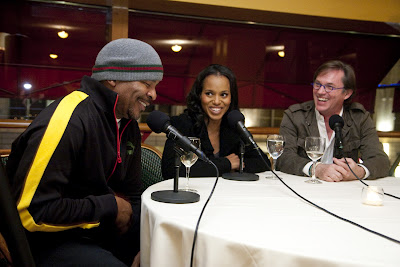 They're calling it David Mamet's most explosive four-letter word yet.
The word is "race" and Race is also the title of Mamet's new play, beginning previews at Broadway's Ethel Barrymore Theatre on November 17 and headed toward a December 6 opening.
Mamet is also directing this provocative new work which stars Richard Thomas,

Kerry Washington, David Alan Grier and James Spader.
We recently met the cast -- live and in person -- at the Redeye Grill on Broadway and had a chance to chat with Thomas, Washington, Grier and Spader.
What struck us first was how accessible, open and friendly these four actors really are. They chatted amicably and easily with one another and with those of us assembled for this special event.
They laughed, joked, and bantered just like four old friends.
But they also admitted that starring in a work by one of America's most daring and most prolific writers is not easy.
Spader (who did most of the talking) noted that in a Mamet play, every word and phrase is exact and you can't "stumble through this or make it up as you go along."
Washington agreed, and added: "It's not just the words that you speak but how you speak them. He [Mamet] wants everything to be exact."
Thomas pointed out that Mamet will play with even the seemingly smallest words such as "and, an, a or but" and then the former squeaky clean star of The Waltons complained that he utters only one hard core, four-letter word in a play that is expected to be laced with profanities.
When Thomas chirped: "I have only one f - - k," Grier quickly responded: "That's because you're married."
And so that's the way the evening went: Four likable, engaging actors joking about a play that tackles a sizzling, serious subject. And they all said they're having a great time working for and with the legendary Mamet.
We've long been David Mamet fans and we're very much looking forward to this new production.
David Mamet, winner of the Pulitzer Prize and New York Drama Critics Circle Award for Glengarry GLen Ross, has also written Sexual Perversity in Chicago, Lakeboat, The Water Engine, The Duck Variations, Reunion, The Blue Hour, The Shawl, Bobby Gould in Hell, Edmond, Romance, The Old Neighborhood, November and the recent adaptation of The Voysey Inheritance.
A two-time Academy Award nominee for The Verdict and Wag the Dog, Mamet's additional film credits include The Postman Always Rings Twice, The Untouchables, Hoffa, Ronin, The Edge, and We're No Angels.
His nonfiction work includes The Wicked Son, True and False, and Bambi vs. Godzilla.

To hear a podcast of the conversation with the cast members of Race, click here.
Posted by Dan Cirucci at 9:52 AM

I'm not so for sure what to this about this show. Generally speaking the only <a href="http://www.greattickets.com/theater”>Broadway tickets for New York</a><br> that I purchase are ones with really good directors but I haven't seen much come out of this one. I guess we'll just have to wait for the reviews. I hope they are good.