Who The Hell's In It 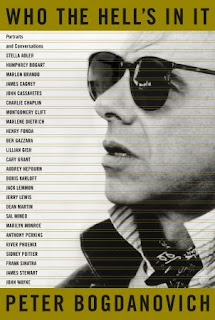 I've just finished Who The Hell's In It by writer, producer, director Peter Bogdanovich and it's one of the best books about the movies I've ever read.
This is not a new book but it is a book that seems to grow more meaningful and more relevant with age.
Peter Bogdanovich, known primarily as a director, film historian and critic, has been working with professional actors all his life. He started out as an actor (he debuted on the stage in his sixth-grade production of Finian’s Rainbow); he watched actors work (he went to the theater every week from the age of thirteen and saw every important show on, or off, Broadway for the next decade); he studied acting, starting at sixteen, with Stella Adler (his work with her became the foundation for all he would ever do as an actor and a director).
Now, in this book, Bogdanovich draws upon a lifetime of experience, observation and understanding of the art to write about the actors he came to know along the way; actors he admired from afar; actors he worked with, directed, befriended. Among them: Lauren Bacall, Humphrey Bogart, James Cagney, John Cassavetes, Charlie Chaplin, Montgomery Clift, Marlene Dietrich, Henry Fonda, Ben Gazzara, Audrey Hepburn, Boris Karloff, Dean Martin, Marilyn Monroe, River Phoenix, Sidney Poitier, Frank Sinatra, and James Stewart.
Bogdanovich captures—in their words and his—their work, their individual styles, what made them who they were, what gave them their appeal and why they’ve continued to be America’s iconic actors.
I particularly enjoyed the author's profiles of Lillian Gish, Cary Grant, Marlene Dietrich, Boris Karloff, Anthony Perkins, John Wayne and Frank Sinatra.
Bogdanovich tells wonderful stories and has great insight. His knowledge of the movies is astounding and his respect for great stars, great movies, the old studio system and great directors is inspiring.
Bogdanovich believes that the ascent of stars as independent agents and deal-makers (absent the studio system) was the beginning of the end of the golden age of movies. And he makes a very valid case to support his claim.
But whether you agree with this movie maker and movie critic or not, you will be spellbound by this book.
It's a wonderful read!
BTW: This is a companion book to Bogdanovich's book about movie directors called Who The Devil Made It
Posted by Dan Cirucci at 7:33 AM