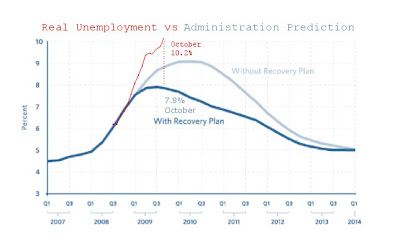 Unemployment under President Obama has soared from 7.6% when he took office to 10.2% now.
In less than one year, Barack Obama and the Democrat Congress have nearly doubled the unemployment rate.
At the same time, on their watch, the deficit has tripled.
The President and his allies have no one else to blame but themselves.
They control the White House, the House and the Senate.
And, let's face it: Their stimulus plan has not worked.
Now, Congressman Mike Pence and the House Republican Conference released a statement on this news: “The American people want to know why Congress is forcing through the Pelosi plan for a government takeover of health care instead of a plan that will help create jobs.”
Charts courtesy of Gateway Pundit
Posted by Dan Cirucci at 1:12 PM