Review: Up In The Air 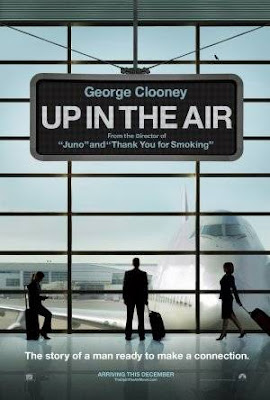 George Clooney's new flick Up In The Air doesn't land in theaters until next month but last night we were treated to an advance preview.
In this film Clooney plays Ryan Bingham, a corporate downsizing expert whose cherished life on the road is threatened just as he is about to reach ten million frequent flyer miles and just after he's met the frequent-traveler woman of his dreams (Vera Farmiga).
Ryan Bingham's job is to fire people from theirs.
The anguish, hostility, and despair of his "clients" has left him falsely compassionate. He lives out of a suitcase, and loves every second of it.
When his boss hires arrogant young Natalie (Anna Kendrick), she develops a method of video conferencing that will allow termination without ever leaving the office - essentially threatening the existence Ryan so cherishes.
Determined to show the naive girl the error of her logic, Ryan takes her on one of his cross country firing expeditions, but as she starts to realize the disheartening realities of her profession, he begins to see the downfalls to his way of life.
The film is billed as a comedy-drama directed by Jason Reitman and co-written by Reitman and Sheldon Turner. It is adapted from the novel, Up in the Air, written by Walter Kirn.
This movie is billed as a breakout film for Clooney -- a chance for him to give a more mature, more nuanced performance. And so, we have the new "vulnerable" Clooney. His character is presented as masculine, structured and controlled but ultimately poignant and endearing.
And when you have warm eyes like Clooney (and you're also tall, dark and handsome) you can pull this off. Plus, it helps to be paired with Farmiga who is sexy and captivating.
The script by Reitman and Turner sails along with a quick wit that is very of-the-moment. The generation-spanning dialogue will make you chuckle and nod in recognition. And the performances (including Jason Bateman as Clooney's boss and a cameo by Sam Elliot) are snappy and on target.
But about three-quarters of the way through, the film seems to lose its way.
There's a point at which Farmiga says "Call me when you're lonely" and, as she turns and leaves, Clooney answers, to no one in particular: "I'm lonely right now."
The film could end right there.
But it doesn't.
And what happens from this point on becomes a bit preposterous.
Still, this movie is better than most. And it's scoring high with preview audiences and via advance reviews from the critics.
Clooney's name always pumps up the box office and the principals are great fun to watch. Plus, the story is hip and thoroughly American as it bounces from airport to airport and city to city.
It's about America right now -- with all its woes, disillusionment, detachment, cheap temptations and yearning for connection and the path to a better day.
A few decades ago that day might have appeared by the end of the movie.
But Hollywood is now so lost in existential ennui that it refuses to embrace such hopefulness within the confines of an otherwise excellent script.
Here's hoping that real life deals us a better hand.