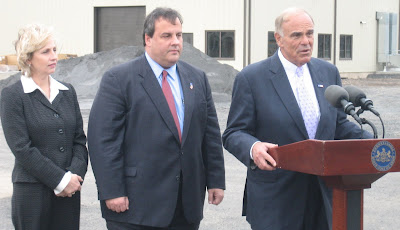 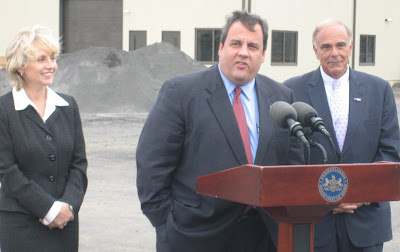 This morning New Jersey Governor-Elect Chris Christie and Lt. Governor-Elect Kim Guadagno met with Pennsylvania Governor Ed Rendell in Morrisville, Pa. (just across the Delaware from Trenton) at the headquarters of AE Polysilicon on the former site of the United States Steel plant. During their brief meeting, the leaders of the two states talked about economic development and job growth.
Afterward, they held a windswept news conference.
Christie noted that he and Rendell shared similar backgrounds. "We're both former prosecutors and we're similar personalities. We had a good meeting and I'm looking forward to working with Governor Rendell on matters of common interest," the Governor-Elect said.
"Pennsylvania has been a model for ways to pursue economic development in these difficult times, "Christie added. "So, while there will always be competition, I think we can also work together for jobs."
Christie said that he and Rendell went over a number of issues including the redevelopment of former industrial sites into clean energy businesses. AE Polysilicon makes the material that is used in solar panels. Rendell noted that Pennsylvania undertook a major effort to get AE Polysilicon to locate in Pennsylvania and pointed out that the company will pay no state or local taxes until 2018.
In other matters, the two Governors agreed to disagree about the dredging of the Delaware River (which Rendell favored and Christie campaigned against). When pressed on this, Christie explained: "We have a different view. But I listened to the Governor. I want to understand his position. I meet with people that I disagree with all the time. I'll listen and we'll see where it goes," he added.
Christie also said he has been talking to New Jersey Senate President Dick Codey and Assembly Speaker Joe Roberts and he did not expect any major spending initiative from the Democrat controlled legislature between now and Inauguration Day. "They've both assured me that this will not happen," Christie explained.
And the Governor-Elect reiterated his opposition to gay marriage in the Garden State by stating once again that if a gay marriage bill ever comes to his desk "I will veto it."
In the interim, gay marriage advocates are attempting to get legislation approved by the lame duck legislature and signed into law by departing Governor Jon Corzine.
Posted by Dan Cirucci at 2:00 PM