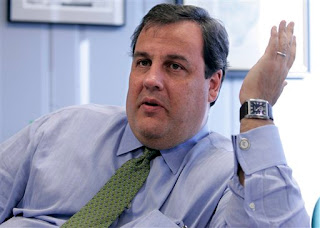 Under New Jersey's constitution the governor of the state is granted enormous power.
In fact, Pulitzer Prize winning columnist and commentator George Will has called the governor of New Jersey "an American Caesar."

New Jersey's new Governor Chris Christie promised bold and decisive action to halt runaway state spending and give the state a balanced budget.
While campaigning throughout the state, Christie said that, if elected, he would use all of the power of his office to impose fiscal common sense on the state government.

And he meant it.

This week, Christie took the first step to deliver on his promise by declaring a Fiscal State of Emergency in the Garden State, trimming many programs and freezing spending.

Chris Christie will not wait.

He knows that he's facing the legacy of years of mismanagement and fiscal recklessness.
He realizes that things may get worse before they get better.

Here are some excerpts from Governor Chris Christie's address to the State Legislature in Trenton this week:

“New Jersey is in a state of financial crisis. Our state’s budget has been left in a shambles and requires immediate action to achieve balance. For the current fiscal year 2010, which has only four and one-half months left to go, the budget we have inherited has a two billion dollar gap. The budget passed less than eight months ago, in June of last year, contained all of the same worn out tricks of the trade that have become common place in Trenton, that have driven our citizens to anger and frustration and our wonderful state to the edge of bankruptcy.

“Our Constitution requires a balanced budget. Our commitment requires us to begin the next fiscal year with a prudent opening balance. Our conscience and common sense require us to fix the problem in a way that does not raise taxes on the most overtaxed citizens in America. Our love for our children requires that we do not shove today’s problems under the rug only to be discovered again tomorrow. Our sense of decency must require that we stop using tricks that will make next year’s budget problem even worse.

So today, I am beginning the process of fiscal reform and discipline. Today, we are going to act swiftly to fix problems long ignored. Today, I begin to do what I promised the people of New Jersey I would do. Today, I begin to give them the change they voted for in November.

“I take no joy in having to make these decisions. I know these judgments will affect fellow New Jerseyans and will hurt. This is not a happy moment. However, what choices do we have left? The defenders of the status quo will start chattering as soon as I leave this chamber. They’ll say the problems are not that bad; listen to me, I can spare you the pain and sacrifice. We know this is simply not true. New Jersey has been steaming toward financial disaster for years due to that kind of attitude. The people elected us to end the talk and to act decisively. Today is the day for the complaining to end and for statesmanship to begin.

“The state cannot this year spend another $100 million contributing to a pension system that is desperately in need of reform. I am encouraged by the bi-partisan bills filed in the senate this week to begin pension and benefit reform. I commend President Sweeney and Senator Kean for leading the way to begin this long overdue set of reforms. I am sure our Assembly colleagues will follow suit with the same kind of bi-partisan effort.

“These bills must just mark the beginning, not the end, of our conversation and actions on pension and benefit reform. Because make no mistake about it, pensions and benefits are the major driver of our spending increases at all levels of government—state, county, municipal and school board. Also, don’t believe our citizens don’t know it and demand, finally, from their government real action and meaningful reform. The special interests have already begun to scream their favorite word, which, coincidentally, is my nine year old son’s favorite word when we are making him do something he knows is right but does not want to do—“unfair.”

“The only principled path in light of these mountainous challenges is this—take these reform bills, make them even stronger and put them on my desk before I return here on March sixteenth for my budget address. And on this you have my pledge—unlike in the past, when you stood up and did what was right, this governor will not pull the rug out from underneath you—I will sign strong reform bills. “I ask of you in the Legislature to show the same frankness and commitment. For inaction is not an option. That was the path taken for far too long.”
Posted by Dan Cirucci at 1:22 PM