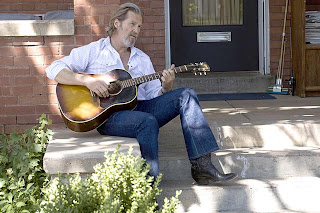 In 1945 Billy Wilder directed a classic tale of a drunk on the skids known as The Lost Weekend.
The film starred Ray Miland and depicted its story with brutal frankness.
The film won the Oscar as Best Picture. Miland won as Best Actor. Wilder won as Best Director. And the writers of the screenplay, Wilder and Charles Brackett also won.
In this film the desperate life of a chronic alcoholic is followed through a four day drinking bout and Miland is superb in the leading role.
And so began a series of films about alcoholics.
In the following years we witnessed I'll Cry Tomorrow, Days of Wine and Roses, A Star Is Born, The Verdict, Barfly and Leaving Las Vegas.
And alcoholism became a route to an Oscar nomination (or even the Oscar) for quite a few of the actors who played these roles.
And now it's happening once again.
This time the movie is Crazy Heart and the star is Jeff Bridges.
Bridges channels Hank Williams, Jr. and Merle Haggard and mostly George Jones to pull off this extraordinary portrayal of a washed up country music star on what seems to be his final tour.
There isn't an awful lot to the story. And we never do quite figure out what the much younger character played by Maggie Gyllenhaal actually sees in Bridges. But suffice it to say that a romance ensues and the tale proceeds in a fairly predictable manner.
And, like most current flicks, this one searches for a final resolution as it approaches its conclusion.
But Bridges' performance is nothing less than poignant without ever being shameless or maudlin. This is a knowing, measured performance -- and he sings, too!
In fact the country music that infuses the film is quite good and there's a wonderful supporting turn by the great Robert Duvall -- who also sings, sorta.
This film is a fine showcase for the talents of Bridges and an excellent cast. And ultimately, it stands head and shoulders above all those "big" super-hyped movies that are currently out there. Crazy Heart is a sensitive, mature, intelligent film with worthwhile insight into country music and the brutal nature of the modern country music industry.
Which is to say it's worth seeing.
So, add it to your list this season.
Posted by Dan Cirucci at 6:31 AM