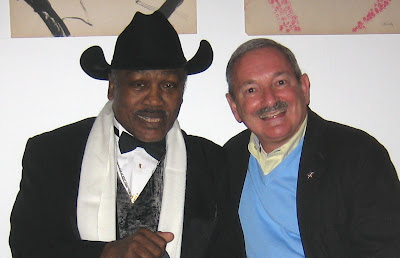 I don't usually make a habit of posting my photos with celebrities here.
But last night I met someone who is far, far more than a celebrity.
Last night I met a true Philadelphia Legend.
Last night I met The Champ.
Of course I'm talking about the former Heavyweight Champion of the World, the great Joe Frazier.
Joe Frazier was the first American boxer to win both the Olympic gold medal and the professional world title in the heavyweight division.
He was always a grappler -- a guy you could never count out. And his story has inspired millions.
In fact, some of the most memorable moments in the 1976 boxing-themed feature film, Rocky - such as Rocky's carcass-punching scenes and Rocky running up the steps of the Philadelphia Museum of Art, as part of his training regimen - are taken from Joe's real-life exploits, for which he received no credit.
Also, Joe Frazier has operated a boxing gym in North Philadelphia since the late 1960s, used by fighters such as Michael Spinks, Meldrick Taylor, his son Marvis Frazier, and Bernard Hopkins.
Joe Frazier is known all over the world.
He's a great champ, a great ambassador for Philadelphia and a true American success story.
You can read more about him at his official web site by clicking here.
Posted by Dan Cirucci at 4:19 PM