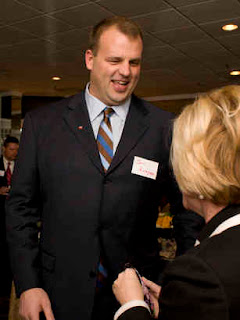 Pro football standout Jon Runyan is running for Congress in South Jersey and even before his official announcement he's generating lots of positive buzz.
Runyan is a big, tough guy.
And he needs to be because he's up against a tough and well-funded competitor in Democrat John Adler.
But Adler remains vulnerable and Jon Runyan has lots of natural assets.
Runyan comes across as endearing and irrepressibly human. He seems like the proverbial big guy with the tender heart -- the sort of guy any scrawny kid would want on his side when the bullies come looking for prey. He's part of a fresh new wave for the GOP, not just in New Jersey but all over the nation.
I like the way Runyan greeted people at the door when they came to the Camden County (NJ) GOP event the other night. I like the hand-printed name badge that he wore. I like his ready smile and relaxed manner.
And I also like the fact that he's easing his way into the race. I'm sure he'd be the first to admit that he's got a lot to learn.
So, my guess is Runyan's really going to listen to people. He'll actually hear what they have to say. He understands that he doesn't have all the answers. And he'll take direction well.
That's what the best football players do, isn't it? They listen. They learn. They study. They absorb. They practice. Then, they go out and do.
Plus, athletes are disciplined, too. Right? And we all know that, above all, it's discipline that wins elections.
Scott Brown proved that. And Runyan has a Scott Brown quality to him.
Like Brown, Runyan seems refreshingly unimpressed with himself. But I'm guessing that Runyan is a quick learner and that his heart's really in this thing.
Heart. That's something that's liable to make a big difference here.
Still, even with all that, I'd say that Jon Runyan doesn't mind if you underestimate him. Not at all. In fact, go ahead and underestimate him.
Then, just watch and wait.

Here's a report from Cynthia Burton at the Philadelphia Inquirer:
Towering above about six dozen Republicans who braved [Thursday] night's snowy mix to meet him, former Eagles tackle Jon Runyan made his debut as a candidate for the U.S. House, shedding his football uniform for a dark-blue suit.
"I think we can go out and run an awesome campaign," he said as he met and chatted with a friendly crowd of Republicans in his first public appearance since deciding in November to run for office.
Speaking at the Camden County GOP's annual Lincoln Day fund-raiser at the Mansion in Voorhees, Runyan bristled at being referred to as what he called a "celebrity athlete millionaire."
He said he had grown up working-class in Flint, Mich. His father was out of work for two years, and when he had work, he took on three or four jobs to support his family.
"There wasn't anything that was given to me," he said.
Runyan, though, probably will hear worse things said about him as he runs in one of the nation's most competitive House races.
He emerged this week as the top organization candidate when his chief rival dropped out of the race to unseat freshman Rep. John Adler, a Democrat.
The Third District, which had been in Republican hands for more than a century, runs through Ocean and Burlington Counties and includes Cherry Hill in Camden County.
The three county Republican organizations plan to endorse Runyan by mid-March, and he then plans to formally start his campaign.
Posted by Dan Cirucci at 6:22 AM

Dan, we have got to get Runyan elected. He is the perfect candidate.

Joe:
Let my readers know how they can help.