Tamed Tiger's Contrition: Will It Hold? 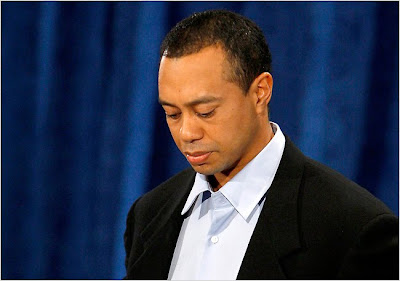 We have a saying in public relations: "A setback is nothing more than a setup for a comeback."
Today, Tiger Woods set the stage for his comeback.
No, he's not ready for his closeup -- not quite yet.
But, pending good behavior he could be fully rehabilitated and back in living rooms all over the country faster than you can say "hole in one."
Was Woods' news conference a perfect performance? Hardly.
Tiger looked puffy and somewhat weary. He certainly did not look like the Tiger we've come to know -- the one shilling for Accenture and Buick and Nike and Tag Heuer.
And at times, Tiger's defensive and vaguely arrogant side seemed visible; like when he chastised the media for following his wife and kids.
Yo, Tiger -- We can understand some sense of protectiveness regarding your family but you should have thought of their well-being before your first sexual escapade. Certainly, this is no time to goad (or blame) the media.
Also, Tiger seemed hopelessly scripted at times, especially when he looked intently, straight into the camera every time he said "I let you down" or "I'm sorry."
And let's not forget that he refused to accept any questions while whole performance was tightly controlled.
But overall, Tiger performed well today.
He did what he had to do.
His contrition seemed full and complete.
He spoke like a man who really has been in therapy, who honestly learned something from it and who wants to get back to it and learn more.
He was credible.
The American public is, if nothing else, compassionate. For the most part, we are a forgiving lot. And we aren't into knocking a guy when he's down.
Tiger came down today. Way down.
He humbled himself.
When a judge takes an oath of office he is sworn in for the life of his term or "so long as he shall behave himself."
This is Tiger's challenge now.
He must behave himself from here on in.
It won't be easy.
But the public will not deny him this chance to set things right. They'll cut him some slack. They want him to succeed.
We want him to succeed because we love a comeback.
And yes, if he does succeed he could come back bigger than ever.
Posted by Dan Cirucci at 1:51 PM