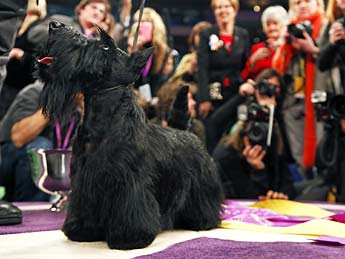 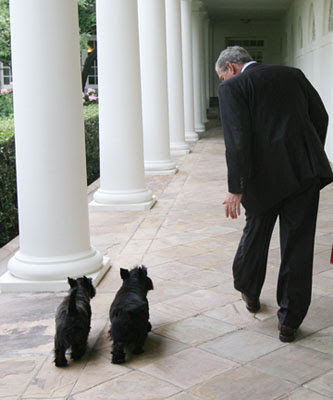 As if things could not get worse for President Obama, a Scottish terrier has gone and won Best of Show at the prestigious Westminster Kennel Club dog show.
The elegant Scottish terrier named Sadie overcame dog-eat-dog competition last night and wowed the crowd at Madison Square Garden to take top honors.
It was an historic win as Sadie became the first winner of the dog-show Triple Crown.
She had been named top dog at the National Dog Show in Pennsylvania in November and the American Kennel Club/Eukanuba National Championship in California in December.
Looking at Sadie, one could not help but thing of Barney and Miss Beazley, the treasured pets of the President and Mrs. Bush.
Surely, you remember Barney and Miss Beazley.
Both Scottish terriers, Barney and Beazley were the subject of books and videos and they were also featured at White House events and celebrations. The only way to describe them is, well -- too cute for words!
Scottish terriers are favorites at Westminster. In fact, Sadie's triumph marks the 46th victory for a scottie in the 134 years of the show.
But Sadie, Barney and Beazley stand out among all the dogs in this adorable breed.
They are superstars.
And as she accepted her honors last night Sadie looked like Barney or Beazley saying "Miss me yet?"
Of course the current White House canine is a Portuguese water dog.
But when all was said and done, the water dog wasn't even in the running last night.
No real competition.
Surely, there's a message in there somewhere.
Posted by Dan Cirucci at 10:02 AM