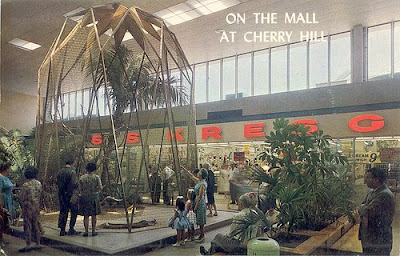 The Cherry Hill Mall opened on October 11, 1961.
Can you see the S. S. Kresgee store there in red lights? Kresgee was the predecessor of K Mart.
Anyway, in front of the store you can see the huge modernistic birdcage. It's very 1960s.
And the cage contained colorful (and sometimes loud) exotic birds
The mall was the first enclosed shopping center of its kind east of the Mississippi and when it opened it envisioned itself as a kind of tropical paradise.
So, all of the plants that you see in this 60's photo were real.
And the birds? Well, they were very real.
In fact, beyond the shrill noises they made there were reports that they weren't always very nice. Whether they may have been able to peck at a few onlookers, I'm not sure. But some people said the birds were downright nasty.
And the cage and the birds required their share of attention.
The birds had to be fed and things could get messy inside that cage.
When the mall was updated (after a number of years) the huge cage was dismantled and the birds were removed. I'm not quite sure where they went but they disappeared.
If you're old enough to remember the birdcage -- well, let's just say you're older than the Jonas Brothers; older than Lady Gaga; older than Ashton Kutcher and probably even older than Demi Moore.
But we won;t dwell on that.
Posted by Dan Cirucci at 2:45 PM

Dan, I don't remember the Cherry Hill Mall Birdcage because I've never been to Cherry Hill. But I love this beautifully written post because it makes me feel as if I did have the opportunity to visit a charming piece of Americana. What a magnificent piece of nostalgia, and a witty commentary on the history of malls in America.

I remember it well. Also, eating lunch at the Horn & Hardart with my mother & Aunt & Uncle. Does anyone remember the amusement rides that were also at Cherry Hill Mall? It was located in one if the long corridors.