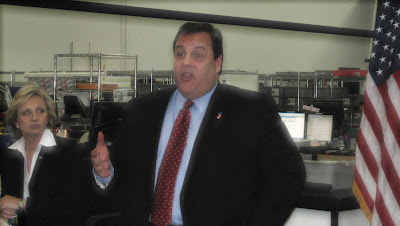 Calling one of his critics "the paragon of easy choices" New Jersey Governor Chris Christie today told a group of South Jersey small business owners that "I'm the Governor and I have to make the tough choices." Referring to Democrat State Assemblyman Lou Greenwald of Cherry Hill Christie reminded his audience that Greenwald is "the same guy who said 'you must have the courage to spend.'"
Along with Lt. Governor Kim Guadagno, Christie spoke at Radwell International in Lumberton (Burlington County). Christie made a campaign stop at Radwell last fall and said he came back to explain his 2010 budget solutions and update his audience on his first month in office.
"I said I would come back and I did," Christie explained. "I always try to do what I say I'm going to do."
While outlining his 2010 Budget Solutions agenda to tackle New Jersey's fiscal woes Christie said that it's impossible to speak about the economy and job creation without talking about cutting the size of government.
"Cutting the size of government is about creating jobs," Christie said.
The Governor lambasted the budget that was in place when he assumed office. "This budget assumed that sales tax revenues would increase by five percent. Only in Trenton would they assume that. Instead, sales tax revenues dropped by five-and-a-half percent," he noted.
"So, we have to act to trim the budget and trim state spending and that's what we're doing," the Governor said. "I knew we couldn't wait any longer so I took direct action," Christie said as he explained the 14 executive orders that he has signed thus far. "And this is just the beginning. More will have to be done," he added.
Pausing to chat for a moment about his public persona, the Governor observed: "They say I'm direct, blunt, combative. And you know this is all foreign to Trenton. And they wonder how this will play or if people will get tired of it. But I don't worry about that. I just try to tell the truth. And I don't think people get tired of someone who tells the truth."