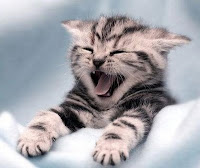 I suspect cat folks will be pleased to see this!

From Matthew Moore at the Telegraph:

People with cats are more likely to have university degrees than those with dogs, according to a scientific survey of pet ownership.

The study also revealed that the combined cat and dog population of Britain is more than 20.8 million - 50 per cent higher than previously thought. Researchers at the University of Bristol say that the superior intelligence of cat owners is unlikely to be caused by their exposure to the famously cunning and selfish pets.

Rather, more educated people tend to work longer hours and choose a pet to fit their lifestyles. Unlike dogs, cats require no walking and can manage with little human company. Dr Jane Murray, Cats Protection Lecturer in Feline Epidemiology, who led the study, said: "We don't think it is associated with income because that was one of the variables we looked at, and there was little difference. "Cats require less time per day than a dog, so they are more popular with educated people who work late and have long commutes." Homes with degree-holders were 1.36 times more likely to have a cat than other households. The same homes were less likely to have a dog than households where no-one went to university.