The Sudden Celebrity of "Snowmageddon" 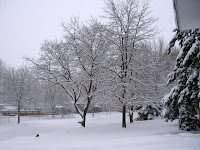 Here in the Mid-Atlantic all anyone can talk about is the slickest new celebrity on the scene. It has a temper, goes out all night long, it’s hard to predict and even harder to control. And usually it wrecks more havoc than Russell Crowe in a luxury hotel room. When it comes to fame, none are cooler right now than Snowmageddon! Or in this case Snowmageddon 2.0.Who says LA attracts all the celebrities? Not Snowmageddon. This fame seeker caused a splash (or more aptly a snowdrift) by skipping New York City entirely in its debut late last week. Forget Vegas, ditch Miami. The first time around Snowmageddon brought attention (and loads of white stuff) from Washington to Philadelphia stopping in between for high profile love affairs with smaller towns like Colesville, Maryland.

You’d have to imagine that the traditional, flesh and blood celebrities are pissed. “Brangelina” sounds pretty wimpy compared to “The Snowpocalypse.” Not even the Super Bowl, the Saints improbable win, or Ellen DeGeneres’s first night on Idol could detract from the near constant media attention on “SNOWtorious B.I.G.” or as some are now calling it “Snowverkill” as we prepared for round two. And it hasn’t disappointed. Snowmaggedon is already more entertaining than every movie Madonna has been in… combined.

Those of us living in the affected areas are captivated. Instead of discussing the Oscars we’re focused on the Dopplers. Meteorologists are hip and snow photos fill Facebook with each of us vying for a more intimate encounter with the winter beast. As I look out my window the white stuff continues to fall, local news crew high on endorphins and armed with rulers enjoy their importance, schoolchildren delight, and we’re forced inside, sometimes without power, sometimes without satellite TV, sometimes without our patience but always with each other. Finally a celebrity that reminds us of what we do have. Maybe Snowmageddon isn’t so bad after all.
Posted by Aimee at 1:55 PM

Nice Blog. Wanna Exchange Link with my blog?? My Url is http://topcelebritiesphotos.blogspot.com