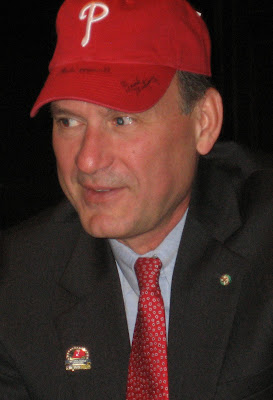 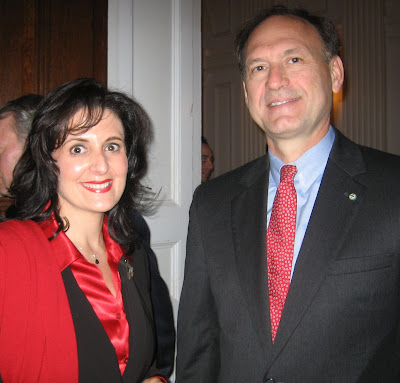 Who's that man in the Phillies cap?
Why, it's United States Supreme Court Justice Samuel A. Alito, Jr.
Justice Alito was at the Union League in Philadelphia yesterday to kick off the 75th anniversary of the Justinian Society of Italian American lawyers. He was welcomed by the radiant Justinian Chancellor, Gina Furia Rubel. And of course the Justice spoke proudly of his Italian heritage.
But he also talked about his commitment to and pride in the Phillies.
Both Gina and the Justice wore their Phillies red and the Justice (who's from nearby Trenton) talked of growing up with the Phillies.
"When I was growing up we were able to get reception from New York and Philadelphia TV stations in Trenton. So, we could watch the Yankees or the Phillies," the Justice recounted.
"But I always watched the Phillies. I took a liking to them from an early age," he added.
And Justice Alito remains an avid Phillies fan.
Mike Stiles, Phillies Senior Vice President for Administration and Operations presented the Justice with a Phillies jacket and a cap signed by coach Charlie Manuel and members of the Phillies management team (the Justice already has a cap signed by the players).
So, Justice Alito promptly donned his Phillies cap and reaffirmed his allegiance to Our Town and Our Team!
There are many, many reasons why we like Sam Alito. But this is one of the sweetest reasons.
Posted by Dan Cirucci at 9:51 AM

Dan - Thank you for the lovely compliment. Yesterday was a very proud day for The Justinian Society. Thank you for sharing the day with us and with your faithful readers. - Gina Furia Rubel