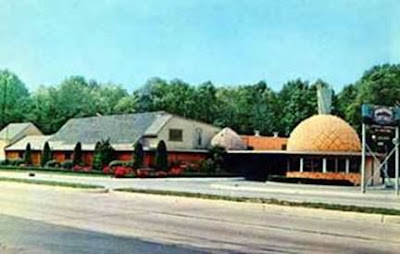 It's hard to believe that there once was a huge pineapple on Route 38 in Cherry Hill.
And I do mean "huge."
The pineapple was actually a gift shop for The Hawaiian Cottage, a Hawaiian/Polynesian themed restaurant that also served Italian dishes such as ravioli (go figure). The place featured "an authentic Polynesian revue and continuous entertainment."
The Hawaiian Cottage was really a lot like a local version of Trader Vic's, the famous Polynesian restaurant chain of the 1950s. Inside, the main room was defined by huge, fake palm trees like the Coconut Grove in LA (now, also shuttered). The Cottage sold a variety of island-themed junk in its gift shop including paper (and later, plastic) leis and cheap parrot shaped mugs that now turn up as collectors items on E-bay.
The Hawaiian Cottage had a 40 year run from 1938 till 1978. It opened when a trip to Cherry Hill (originally Delaware Township) was quite an outing and closed to make way for an Olive Garden.
So, there's still a themed restaurant on the site -- one that still serves ravioli.
But that's another story.
Posted by Dan Cirucci at 11:19 AM