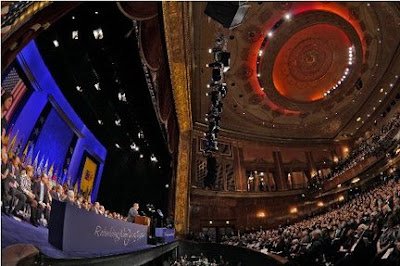 Above, you can see the panoramic view inside the War Memorial Building in Trenton today as New Jersey's new Governor Chris Christie took his oath of office as the 55th Governor of the Garden State.
The War Memorial was jammed to the upper reaches of the balcony with joyous celebrants who gave the Governor many extended, standing ovations and hooted and hollered every time he pledged to do "exactly what you elected me to do."
The new Governor's theme was "Change Has Arrived." And Christie hammered home the theme in every word, phrase, sentence and paragraph of his stirring inaugural address.
"You voted loudly and clearly for change and you have entrusted us with what may be our last, best hope for a stronger New Jersey—the New Jersey of our youth, full of hope and opportunity," Christie said. "New Jersey, you voted for change and today change has arrived—right here, right now," he added.
In a dramatic move, Christie called the Democrat Speaker of the State House and the Democrat President of the State Senate to the podium and asked them to join hands with him as a solemn pledge to work together for the people of New Jersey.
Taking a page from President Ronald Reagan, the new Governor introduced five "New Jersey heroes" -- ordinary people who have made a big difference in the lives of their own communities through charitable and civic endeavors.
Governor Christie then said that these five "should serve as models for" the leaders of the state. "If they can accomplish this much, then think of how much we can accomplish if we work together," Christie told state legislators on both sides of the aisle.
"Let us shake hands as a symbol for our citizens of all that is possible in a future that demands that who gets the credit finally takes a back seat to doing something worth getting credit for," he added.
Christie said he came to the Governor's office out of a deep love for the people of New Jersey and with the intent of serving the people rather than himself. He pledged bold leadership and a new approach to old problems. "On thing is clear," he said "the old ways of doing business have not worked."
Christie expressed what he called "supreme confidence" that he can get the job done by embracing new policies and marshaling support from the people of New Jersey.
"Yes, we will have to cut some programs and transform others to get our budget in balance," he explained. "Yes, we will have to curb spending in municipal governments where there has been too little control. Yes, we will have to restrain State government, even as we invest to be prepared for the economic competition ahead," he added. "But we can do these things—and once again be a home for growth."
Here are some other key lines from the Governor's remarks:

Either to work together to move our State forward, or to get out of the way of those who will.

Believe me, I did not come to this office for failure. I came here for success, the kind of success that only comes from putting public service ahead of self-service.

I will heed the message I have heard over and over again from our citizens as I have traveled around the State in the last 11 weeks—simply put, they have told me to do what I said I would do. So let there be no doubt in this hall, or in any corner of this State: I will treat that promise to the people of our State just as solemnly as I will treat my oath of office. I will do exactly what I said I would do over the last year, no matter the obstacle or trial.

This is not a time for just another season of cynicism. With a State in crisis, we must cast aside blame and embrace action.

We can restore pride in our State. We have the talent, the natural beauty, the rich history, and the even richer character as a people, to be proud of New Jersey again. It is time to bring our pride back.

The era of expensive and sometimes thoughtless mandates from Washington must end. After all, the States are supposed to be “laboratories of democracy”, not guinea pigs for failed federal experiments.