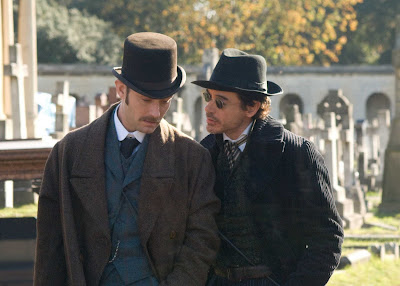 In the 1920s and 30s Warner Brothers Studios made its mark in the movie business with loud, gritty, urban black-and-white crime dramas. These dark, violent stories featured heroes and villains who were sometimes hard to tell apart because nearly all of them operated outside the law.
Watching Warner Brothers' new big-budget version of Sherlock Holmes you have to think that the late Jack Warner would be proud.
This film is dark, gritty, crime-ridden, urban and very violent. And you'd better pay attention because there are no white hats and black hats to tell the good guys from the baddies.
If you're expecting an update of the old Basil Rathbone Sherlock Holmes flicks, disabuse yourself of that notion right now.
Under the superbly inventive direction of Guy Ritchie, this is Sherlock Holmes on steroids -- tough, tenacious and very physical. Yes, the great detective is still cerebral and his approach to crime solving can be scientific but he's also witty, moody, sarcastic, provocative, flirtatious and pugnacious.
It's hard to imagine anybody but Robert Downey, Jr. as this updated, younger, sexier Sherlock. Downey is as much a swashbuckler as Errol Flynn and as dashing and charming as Clark Gable, in equal measure.
Not since Paul Newman met Robert Redford in Butch Cassidy and the Sundance Kid have two buddies pulled off such an obvious, unabashed bromance as Downey and Jude Law as Holmes and Dr. Watson. The chemistry between the two of them defines this high-spirited London adventure. And boy are they fun to watch.
Downey's every move, every gesture and every word prove compelling. He's got so much star quality that even the crinkles around his huge, deep, dark eyes are fascinating. And Law is the perfect Redford to Downey's Newman -- a pretty boy who can't resist his more complex, more devilish, more adventurous friend.
I won't tell you too much about the mystery at the center of Sherlock Holmes but I will tell you that this is a companion piece to National Treasure and it involves Scotland Yard, the industrial revolution, the fragility of democracy, Baker Street, London's sewers, a slaughterhouse, Parliament, magic, sorcery, the Thames River, jewels, the British caste system, America's civil war, the nature of fear, Professor Moriarity and Tower Bridge.
If those things don't seem related or if this doesn't make sense to you, don't worry.
Yours is not to solve the mystery.
Yours is simply to watch and lose yourself in the story, the great production values, the marvelous cast and the grand adventure of Sherlock Holmes.
This is superb Hollywood moviemaking and surely one of the best pictures of the year.
Don't miss it!
Posted by Dan Cirucci at 6:02 AM