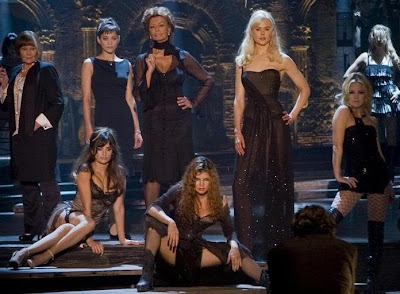 The original Broadway production of Nine opened in 1982 and ran for 729 performances, starring Raul Julia. The musical won five Tony Awards, including best musical.
It was directed by Tommy Tune with a book by Arthur Kopit and Mario Fratti, music and lyrics by Maury Yeston.
The story is based on Fratti's adaptation of Federico Fellini's autobiographical film 8½. It focuses on film director Guido Contini, savoring his most recent (and greatest) success but facing his fortieth birthday and a midlife crisis blocking his creative impulses and entangling him in a web of romantic difficulties in early-1960s Venice.
That's the story behind the new Rob Marshall film of Nine which opened on Christmas day.
Yes, I saw the original production of Nine on Broadway and it was one of the most extraordinary musicals I've ever seen. Positively overwhelming.
And I'm here to tell you that the film is every bit as good.
With Daniel Day-Lewis as Contini and a stellar lineup of international stars, Nine combines adult sensibilities, European panache, high style, great music, a sophisticated story and dazzling imagery to present entertainment of the highest order.
It is above and beyond most anything you will see at the movies this season.
But, you must come to Nine with some knowledge of Italian cinema and some sense of the life of Fellini. It also helps if you are a fan of the world's finest actor, Daniel Day-Lewis or if you adore the great Judi Dench or if you simply wish to gaze upon the legendary Sophia Loren or hear the lilting tones of Marion Cotillard. And then there's the breathtaking sensuality of Penelope Cruz, the flirtatious seductiveness of Kate Hudson and the ravishing, statuesque presence of Nicole Kidman.
Nine is proof that there is no such thing as too much of a good thing.
Can you ever get enough of anything that's beautiful, beguiling, delicious and Italian? I don't think so.
With great production numbers, superb acting and nostalgic slices of Italy when it really was la dolce vita, Nine moves along with the smoothness and agility of a fine Italian sports car.
What is it all about?
It's about the struggle to create -- the torture of creativity; the misunderstood creative mind.
If you've ever created something where there was nothing before; if you have an imaginative mind and you use your imagination freely, you will understand Nine.
And even if you don't, what's not to like?
Loren. Cruz. Hudson. Cotillard. Kidman. Bella!
Don't delay: Hop into your Maserati and rush out to see Nine ASAP!
Posted by Dan Cirucci at 6:08 AM