McNabb And Reid Must Go 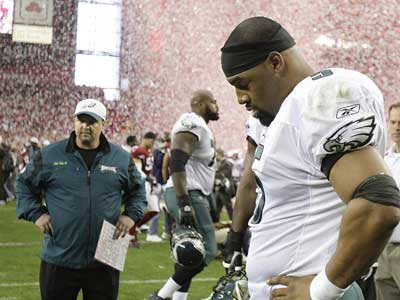 I don't know the first thing about football.

But here's what I wrote about the Eagles one year ago. And I repeat it now:

Here's the bottom line: You can't keep losing the Big Games and expect people to take you seriously.

When you lose four times in five conference title games, something's wrong. And don't forget that for three of those games the Eagles were favorites.

This was a pitiful loss.
It was unforgivable -- unforgivable to do this to the fans who have come back again and again and again and again and, yes . . . AGAIN only to be disappointed.
It simply cannot go on like this.
It cannot stand.
Let's put it this way: If I supported a candidate or a political party and we suffered losses over and over and over and over in the Big Contest, I'd demand that the party change leadership; undergo a complete and total overhaul. Otherwise, I'd walk away.
Hey, I'm capable of tremendous loyalty and I ain't afraid of losing.
But losing ain't fun - especially when you're teased and your team or party or candidate loses the big game or the big race. This is dysfunctional. It's unhealthy. It's near pathological.
So, McNabb must go. Reid must go.
In fact, if they were at all decent about it they'd simply submit their resignations. They failed.
You can analyze it all you want. And, you can make all the excuses you want.
And it's true that Reid & McNabb & Co. gave us some great thrills.
Still, no matter how many games they won or how many times they came back, there's only one way to describe them now: LOSERS!
Posted by Dan Cirucci at 8:16 AM

Yeah, get out of philadelphia. If they don't leave peacefully will throw the garbage out, will throw rocks at them at games. We don't want you mcnabb, we don't care if you're a good quarterback during the regular season. You fail when it counts, your record shows it getting to the playoffs 8 times the past 10-11 yrs and you failed to win a superbowl. Its ridiculous that Reid is forcing Mcnabb on us when no one wants him here. Go to chicago bears, go to crappy buffalo, just get away from philly!