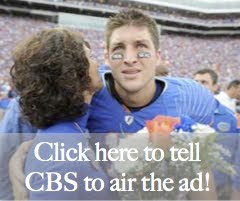 Last year CatholicVote.org fought hard to have its “Life: Imagine the Potential” ad shown during the Super Bowl.
After several days of negotiations, NBC rejected the ad.
This year Focus on the Family has had success with a different network, as CBS is poised to show their own ad celebrating the accomplishments of college football star Tim Tebow next Sunday.
In 1985, Tebow’s mother Pam was advised to abort her child.
She decided against it citing her Christian faith as a source of hope that her son would be ok. Her son, Tim Tebow, won the Heisman Trophy in 2007.
While the ad has been approved, pro-abortion groups are now urging CBS to censor the Super Bowl ad!

Sign a group letter to CBS. Tell them not to give in to pressure and show the ad!

And tell your friends to visit www.CatholicVote.org to join us!