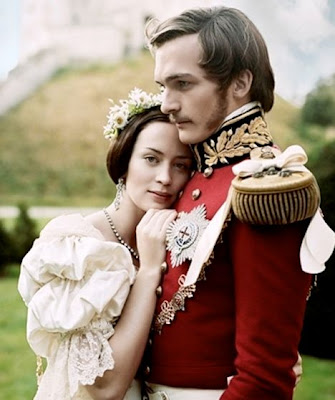 The Young Victoria is the story of a young, inexperienced leader who thinks she is ready to take on the world.
And she truly does have the world at her feet.
She presides over the world's most powerful nation and is the heir not only to the world's most prestigious throne but also to a vast empire.
This lush, extravagant costume drama works on so many levels that it's hard to figure out where to begin.
Emily Blunt is marvelous as Queen Victoria; halting at first and then ever confident and she gains and loses and regains her footing. She is an extraordinary young actress.
Rupert Friend is dashing, intense and nothing less than compelling as Prince Albert.
And Paul Bettany and Miranda Richardson also shine as Lord Melbourne and The Duchess of Kent, respectively. Their performances are mature and richly subdued.
If you are at all interested in history, romance, the British empire or royalty, this movie is for you. Even if you think you know the story of Victoria and Albert you will find much to discover in The Young Victoria.
Though Queen Victoria has long been depicted on film and on stage, this is an entirely new story told from a new vantage point. This is the story of the events that led up to Victoria's coronation -- the struggle for power within the British royal family and indeed within the royal families of Europe.
This is also the story of how Victoria came to terms with her monarchy, how she met and fell in love with Albert, how she and Albert carved out their roles separately and together and how she learned to face personal and political struggles and endure as Britain's longest reigning monarch.
The film is a joy to watch, beautifully directed by Jean Marc Valee and written by actor, writer, director and producer Julian Fellows.
The Young Victoria is absolutely enthralling. As far as I'm concerned, it's the best movie of the year. Run out to see it as fast as you can!

BTW: These two wonderful lines in the film are worth recalling: "You should never have to apologize for your passion," the young Victoria says at one point. And at another point Victoria's aunt admonishes her that "You are confusing stubbornness for strength.
Watching this film I thought the President of the United States should now remember never to confuse stubbornness for strength. Stubbornness will not serve him well just now. And, he should certainly show less cool and more genuine passion (if he has any). He should stop apologizing to everyone except perhaps, the people who elected him.
Posted by Dan Cirucci at 12:31 PM