Seen And Heard At NJ Inaugural 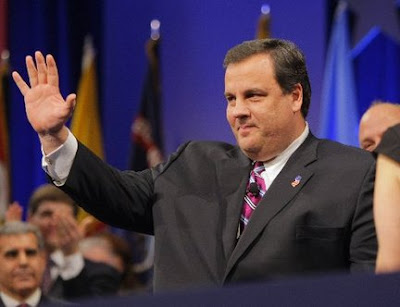 We saw so many familiar faces and chatted with so many New Jerseyans and prominent figures from around the nation at Governor Chris Christie's Inauguration that it's hard to know where to begin.
But here is a rundown of some of our observations:

--New Jersey's new, young first family looked great today. Chris Christie, First Lady Mary Pat Christie and their three children epitomize the renewed spirit of our state. The Governor was so proud when his two youngest children stepped forward to lead everyone in the Pledge of Allegiance that, at first he looked at his kids instead of looking toward the flag. But he quickly checked himself. Ahh . . . a father's pride!

--All former living New Jersey Governors were on the platform today save one: Governor Jim McGreevey.

--Chris Christie took the oath of office in a strong, clear, determined voice. Chief Justice Rabner administered the oath beautifully. There were no flubs on either end. And that's impressive because New Jersey's oath of office is quite long. Wisely, the oath ends (as all such oaths should) with the words "so help me, God."

--New Jersey Secretary of State Nina Mitchell Wells performed the ceremonial task of handing the Great Seal of the State to Governor Christie and she did it in an manner that barely hid her sense of disappointment. Our new Lt. Governor Kim Guadagno will serve as the new Secretary of State.

--Of all the former Governors in attendance ( Whitman, Kean, Byrne, Florio) none seemed more pleased to be there than Jim Florio. Chatting with Jim, we reminded him of his first run for office when he sought an Assembly seat from Camden County. We supported him at the time and worked on his campaign. Now, that was along time ago!

--Governor Tom Kean was amiable as usual and attracted a large crowd at the post-Inaugural luncheon which was dotted with notables from throughout the state and nation. He remains a hugely popular and respected figure in the state and beyond.

--Governor Brendan Byrne remembered us from our days in Trenton when we worked for the New Jersey State Bar Association and he was Governor. It was great to see Governor Byrne again and to share pleasantries with him.

--Republican National Committee Chairman Michael Steele towered above most others in the crowd at the luncheon. Steele was in a jovial mood and told us he's very, very upbeat about the GOP this year.

--We thanked former [acting] Governor Don DeFrancesco on his fine service to the state after Governor Whitman left office to join the Bush Administration. DeFrancesco was happy to see that many of us remembered his contributions to our state.

--New Jersey GOP Senate Leader Joe Kyrillos played a huge role in the Christie victory and Kyrillos happily greeted both Democrats and Republicans throughout the day.

--Our new Lt. Governor Kim Gudagno looked absolutely radiant as she accepted congratulations from so many in attendance. We gave her a big hug and she, in turn offered mucho thanks.

--The post-inaugural luncheon was themed to tastes of New Jersey and included pastries and cookies in the shape of the state as well as clam chowder, mini-hoagies, rigatoni, fresh salads and a variety of soft drinks among other treats. The event was designed by Fabulous Foods of Paramus.

--We spotted Judge Andrew Nepolitano from Fox News in the crowd at the post-inaugural luncheon inside the War Memorial Building.

--The effervescent Assemblywoman Dawn Marie Addiego from Burlington County greeted us warmly. It was great to see her once again. Dawn is a bright shining star in the Republican party.

--Yes, we did see New Jersey Senator Frank Lautenberg but we never got around to chatting with him. Ain't it a shame?
Posted by Dan Cirucci at 3:57 PM