Nothing 'Complicated' About It 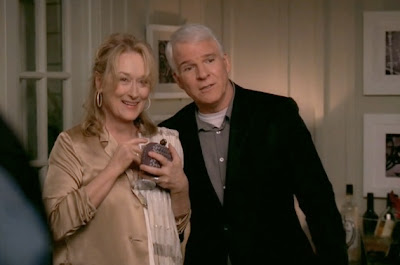 Watching the new Meryl Streep flick It's Complicated, I was reminded that you have to be really old to remember when Alec Baldwin was young and handsome.
But he was, once upon a time.
Now he's all bloated and blotchy.
It would be kind to call him a caricature of himself.
Alec Baldwin is the new William Shatner. He doesn't care if you laugh at him or with him (or at his naked ass or hairy belly) just so long as you laugh. I suppose he's happy to still be working and appearing in films and TV shows that manage to attract an audience.
And It's Complicated is attracting a big audience right now because it's got the buzz. Everybody wants to see Meryl Streep in this Nancy Meyers dramedy about an older divorced woman who has an affair with her ex and discovers that she's still vital, still attractive, still alive.
But there's nothing complicated about the underlying message of this film -- a message that no one wants to talk about. Here it is: Divorce ain't funny. It's messy and destructive and it hurts other people, including the kids. And if you're attentive the message is right there (for about ten seconds) three-quarters of the way through the movie.
OK, now that we've got that our of the way I can tell you that this is slick Hollywood movie making that delivers what it promises. It's entertaining.
Meryl Streep is wonderful as usual. She has a deft comic touch but she can be poignant and vulnerable as well. And Steve Martin is fine in a mature, understated performance. The supporting cast and production values are also top notch.
Basically, this movie is about boomers getting old. It ain't always pretty because this is a generation that has gotten it wrong more than it's gotten it right. And many boomers have left the debris of their lives along the shoreline. There's a lot to clean up.
But all of that would be just this side of maudlin and, goodness knows we're coming off a very down year. We need some chuckles.
So, count on Hollywood and the likes of Meyers, Streep & Co. to get a laugh out of it all and do their damnedest to give it just a dash of meaning after all.
Posted by Dan Cirucci at 5:29 PM