The Perils of Becoming Your "Best" Self 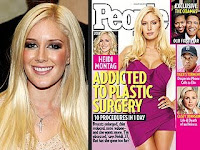 Among the least important news stories of this week is the People Magazine cover story devoted to reality star Heidi Montag's revelation that she is "obsessed" with plastic surgery. Since she recently had 10 procedures in one day I am bound to agree that she is indeed "obsessed." "Sick" and "sad" are also words that come to mind. The money that went into her new (boobs, butt, nose, chin, cheeks, stomach, thighs - take your pick) would have been better spent on some serious therapy or a large donation to the folks in Haiti who have a legitimate need. She is after all 23 years old. No one needs cosmetic surgery at 23 years old. It's a simple fact of life like death and taxes. 23 year olds are uniformly young and spry and gorgeous and if we've lost sight of that what will come next, 7 year olds wearing thongs? Oh wait...

Sadder than the surgery itself is the impetus behind it. People reports that Heidi chronicled her journey to be "the best me" and then, of course, she sold it to People. Or more aptly, her new best self sold it to People. Unfortunately when Oprah (who has done much good) birthed this idea of being the best version of yourself she threw us into a constant self-help spin cycle. Instead of living up to its intent this focus on making ourselves "better" puts us squarely in the spotlight of our own psyche and dims the lights on everyone else, forcing those around us, even our loved ones, to take a supporting role. If you've ever heard someone say "I deserve to be happy" to justify an affair you know how this concept can backfire.

And here's the second issue, specific to Heidi Montag but I imagine shared by many folks who resolved to be better versions of themselves in 2010. To put it bluntly: if a new nose makes you a better person, you weren't that good to begin with. Health is very important but there is a rampant belief that having a perfect body (which doesn't exist, by the way) is like having a winning lotto ticket - a pass to a place without worries. Unfortunately we all know what really happens to lottery winners and it's usually even worse than a botched boob job.

So I would implore you - whether you're 23 or 32 or 99 to look out, not in, this year. Instead of trying to find yourself, try to lose yourself - in a good book, a movie, an art exhibit, in friends and family, and Sunday brunch with stuffed French toast, in a run in the park, in holding someone who needs to be held and letting go of the one you want most to keep, in wrinkles more perfect than any tucked tummy, and sunsets that remind you that you're already better than you thought. After all, you were made by one who doesn't make mistakes. So don't mess up His work, okay?
Posted by Aimee at 9:17 PM