From Inside DC: Grim News 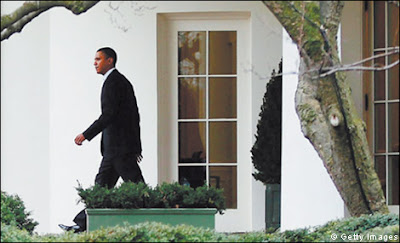 President Obama now faces a State of the Union address with an agenda in tatters.
For Democrats, the word out of Washington is grim.
Many members of his own party are now deserting Obama. Those who want to get re-elected are quickly and clearly putting distance between themselves and the President. And they're not shy about it.
On the heels of the stunning Democrat meltdown in Massachusetts (not to mention NJ and VA) the stock market plummeted (triggered by Obama's badly timed announcement of new investment regulations veiled as "reform") and now even federal reserve Chair Ben Bernancke is in trouble.
My sources in the nation's capital tell me that you can expect even more Democrats to announce that they will not seet re-election to Congress and that there could even be some Democrats (particularly in the south) switching over to the GOP.
"They're afraid," one person told me. "They see this as much worse than they feared. They're looking for cover, for a way out, anything. They feel trapped. They want options."
There is also much speculation in Washington that Hillary Clinton may eventually resign as Secretary of State to challenge the President for the 2012 Democrat nomination for President. At the very least, a resignation would give Hillary new options. And there's little reason why she would want to remain on a losing team and be part of a besieged administration.
There is also some talk of a challenge to Obama (within his own party) from the left. Those on the far left are not happy with the President -- not happy with the backroom deals, all the compromises, the vacillation, the broken promises and the failure to stand firm.
And then there is much chatter about who will have to pay for this mess.
Consensus: One or more top White House operatives will have to go.
The President himself has admitted that he's done a bad job of articulating the agenda.
He says he wishes he could have spoken more directly to the American people.
Who will pay for this. Certainly, David Axelrod's strategy has not worked. The widely-praised image guru has failed.
And Rahm Emanuel's dealings with Congress have come under increasing attack. Many House and Senate members have had it with Emanuel's take-no-prisoners approach. They feel they've been made sacrificial lambs at the alter of Obamunism.
And Robert Gibbs has succeeded in taken a largely-friendly (if not adoring) press and made them, at the very least, increasingly suspicious. Gibbs is a dud.
Valerie Jarett? Many blame her for the embarrassing gate-crasher mess and for whispering into the President's ear with too much bad (and often paranoiac) advice.
The Chicago gang is under fire. And more and more it seems like one or more people will have to take a fall for the boss.
But the real worry in DC is this: That Obama hasn't learned a damned thing.
That he's stubbornly insisting on his failed agenda. That he still thinks he's campaigning. That he's still blaming Bush. That he's still hunkered down. That he still hasn't learned how to open up, reach out, lead and govern like a leader.
Those close to the situation say the President is icy and detached.
The temperature now is suprisingly mild and we're enjoying a nice January thaw here in the northeast.
But The President hasn't gotten the message.
He's never warmed up.
Theory: His own vaulted self-protectiveness and deep-seated insecurity prevents him from changing his ways.
It's what he knows.
It's what works for him.
It's what has nurtured and fed his hard-shelled ego.
And he's loathe to abandon it because he knows no other way.
Botton line: Grim.

BTW: Seen not far from Capitol Hill at Wolfgang Puck's The Source -- Rahm Emaunuel at the bar chatting with another man. A rare sighting of the increasingly barricaded Chief of Staff. Was Rahm shopping his resume?
Posted by Dan Cirucci at 11:28 AM