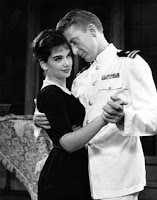 Yesterday's untimely and tragic death of Heath Ledger reminds us once again of that old adage that "they always die in threes." Over the past week, in addition to Ledger the entertainment world also lost Brad Renfro (most will remember him as the little boy from the movie, The Client) and Suzanne Pleschette. Suzanne, who was married to Tom Poston, died just shy of having her star placed on the Hollywood Walk of Fame and not very long after the death of the man who created the Walk of Fame, Johnny Grant. The husky-voiced Pleschette was a radiant talent and a fine actress who also had a natural knack for comedy.
Suzanne and Tom married in 2001, which was 40 years after they first met. They are shown in the 1959 Broadway play Golden Fleecing. Reviewing the play Brroks Atkinsonson of the New York Times rightly declared Suzanne "stunning . . . with a nice sense of comic adventure."
Suzanne and Tom came from a time when actors earned their mettle on the Broadway stage and then went on to Hollywood. Today, actors often burst forth from Hollywood and remain film stars who sometimes play Broadway (and usually for a limited time only) to give a show a lift. Over the years, something has been lost in this shift.
Posted by Dan Cirucci at 7:24 AM