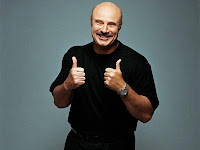 Some people just can't get enough attention.
Dr. Phil tried to snag headlines by coming to the rescue of Britney only to alienate Britney's family and wind up looking like a huckster.
Now, a complaint has been filed against Dr. Phil with the California Board of Psychology.
The complaint reportedly accuses Dr. Phil McGraw of practicing without a license when he visited Britney at Cedars-Sinai Medical Center after her meltdown earlier this month, according to TMZ.com.
The complaint alleges Dr. Phil practiced clinical psychology without a license and further violated doctor-patient privilege by discussing the pop star's case with the media. Dr. Phil has never been licensed to practice in California, and he is no longer licensed in his home state of Texas.
McGraw failed to complete the conditions imposed as disciplinary sanctions by the Texas State Board of Examiners of Psychologists in 1989.
At that time a former therapy client had filed a complaint against him, claiming their relationship was inappropriate.
McGraw later admitted giving her a job but denied touching her.
Soon after he was officially reprimanded, Dr. Phil closed his private practice
Posted by Dan Cirucci at 10:21 PM