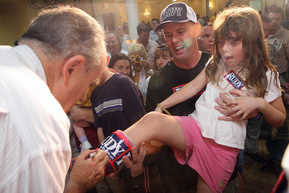 From the Bradenton (Fla.) Herald:
Supporters gave Rudy Giuliani a rock-star reception when he made a campaign stop in Manatee County on Saturday in a state crucial to his bid for the Republican nomination for president. . . As the former mayor of New York stepped onto the stage in the ballroom of the Senior Enrichment Center on Ninth Street West, the standing-room-only crowd of about 800 cheered after waiting for more than a hour for him to arrive.
Joyce and John Tevald didn't mind the wait to hear from their choice for the Jan. 29 primary.
"We're familiar with what he's done for New York City," said Joyce Tevald, who moved to Manatee County with her husband from New Jersey about a year ago. "He did a fantastic job cleaning it up." . . . Giuliani, who is concentrating his campaign in Florida, took off his suit jacket and rolled up his sleeves in the overheated room before giving his stump speech.
He spoke about the tax cut plan he recently unveiled, saying the nation's growth economy is based on three fiscal policies: low taxes, responsible government spending and moderate regulations.
"People should be able to keep more of their income," Giuliani said to roaring approval from his supporters. . . . The great turnout for Giuliani had all local Manatee County for Rudy leaders sitting on the stage beaming with pride.
Photo: Brian Blanco, Bradenton Herald
Posted by Dan Cirucci at 9:41 AM